The Struggle for Merdeka in West Papua

It has been argued that nonviolent struggles to liberate occupied countries – such as West Papua, Tibet, Palestine, Kanaky and Western Sahara – have failed far more often than they have succeeded but that secessionist struggles (that have sought to separate territory from an existing state in order to establish a new one) conducted by nonviolent means have always failed.

However, this argument fails to properly take into account one crucial variable: the quality of the nonviolent strategy that has been used. Given that none of the cases cited above, for example, has ever planned and then systematically implemented a comprehensive nonviolent strategy of liberation/secession, it is accurate to observe that struggles that largely (but not necessarily wholly) reject the use of violence and then use a randomly selected and applied range of tactics, most of which are not violent, have 'failed far more often' or have 'always failed' to achieve the desired outcome.

In essence, the failure is one of strategy, not of nonviolence per se. And if we fail to identify the problem correctly, we inaccurately assign the blame for failure. 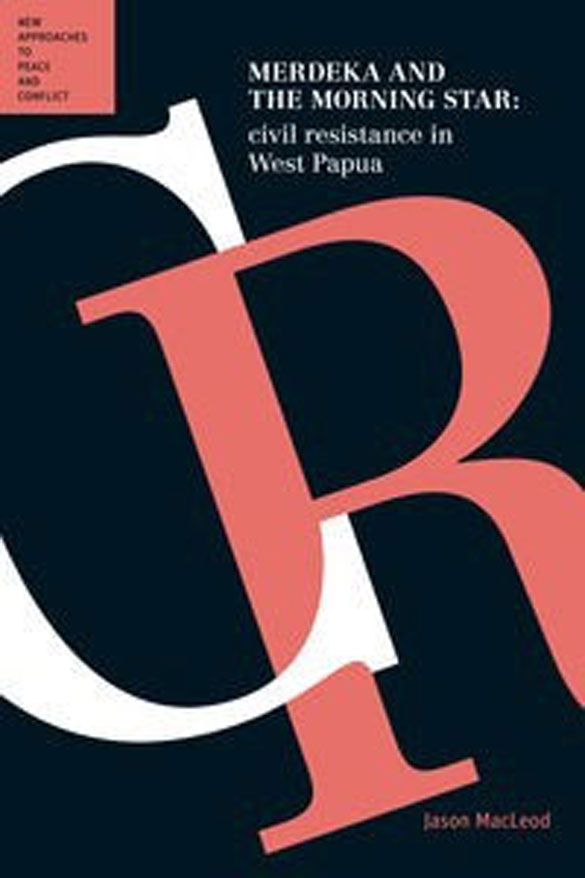 In Jason MacLeod's new book,’ Merdeka and the Morning Star: Civil Resistance in West Papua', in the failure to develop a comprehensive strategy of any kind, violent or nonviolent, to liberate West Papua is overwhelmingly evident. And MacLeod does an excellent job of identifying why this has happened as he provides us with an overview of the history and geopolitical circumstances of the occupation of West Papua as well as a history of the resistance, both violent and nonviolent, to this occupation. He then identifies what still needs to happen if Papuans are to develop and then effectively implement a comprehensive nonviolent strategy to achieve the richly textured and multifaceted merdeka to which they aspire.

MacLeod, an Australian, has spent an enormous amount of time in West Papua since 1991 and the reason for this is explained early in the book with a compelling personal story that gives his commitment to West Papua both focus and depth. He has been actively involved in their struggle as a student (learning about the history and culture of West Papua), scholar (observing and documenting the origin and history of the occupation by interviewing key personnel and reading important documents), compassionate consultant and teacher. He has also spent time in Indonesia and travelled to many countries in search of the knowledge necessary to better understand why Indonesia occupies West Papua while most of the rest of the world either supports the occupation or does nothing.

Like all occupying powers, but particularly one that is a borderline 'failed state', the Indonesian elite cares nothing about West Papua, simply treating it as a resource (particularly for forest and mineral products which it can steal and then export) while subjecting Papuans to the usual abuses of occupation: lack of political recognition and participation, state violence, discrimination, racism, economic marginalisation, large-scale industrial development at the expense of traditional landowners, denial of access to health, welfare, education and other human rights, unfettered migration of Indonesians to displace/dilute the indigenous population, as well as police, paramilitary and military violence, including torture, to repress Papuan dissent.

Moreover, of course, the Indonesian elite ensures that West Papua is relatively isolated from media scrutiny, access to international agencies and diplomats (even though many western states are well known to oppose any indigenous struggle for self-determination, given it would only raise questions about their own subjugated indigenous populations).

A key feature of this occupation, which is worth emphasizing, is the Indonesian government's facilitation of resource extraction by large transnational corporations such as Freeport-McMoRan/Rio Tinto and BP among a host of others, including a dense network of Chinese, Malaysian and Korean timber and mining companies. In this context, it is also worth noting the corrupt involvement of the Indonesian police and military in the occupation by securing financial kickbacks for providing 'security' to these corporations. This highly profitable corruption ensures the enthusiastic complicity and brutality of the police and military in support of the occupation.

But these are not the only problems, as MacLeod makes clear: 'There are also significant internal movement challenges' including significant mistrust and disunity between the various parties of the resistance both within and outside West Papua, lack of resources, inadequate political analysis, and lack of strategic planning and coordination.

Nevertheless, 'Papuans continue to dream, plan and act in pursuit of self-determination and decolonisation' with significant diplomacy, lobbying and legal work at the international level (particularly among Melanesian allies in the Pacific), a variety of local victories through women's and worker actions within West Papua and, most notably, a clarity and agreement about the root causes of the conflict in West Papua.

Moreover, there is an emerging consensus about the desire for self-determination, respect for their rights as indigenous peoples, greater trust and unity among Papuans symbolised by the formation of the United Liberation Movement for West Papua in December 2014, and a gradually emerging consensus about the nature of their liberation strategy with many prominent Papuans articulate in their advocacy of nonviolent struggle and many organisations publicly committed to it. In the words of Reverend Benny Giay: 'Resisting without violence is not something foreign to us, it is part of our history'. And from Reverend Herman Awom: 'Even when we were imprisoned we tried to keep a nonviolent struggle.'

The final section of MacLeod's book provides a compelling explanation of how Papuans might systematically address the problems they face in developing and implementing a comprehensive nonviolent strategy of liberation. It reflects the work of a thoughtful scholar who has both listened well to the needs and aspirations of the people of West Papua, knows and understands the many obstacles that need to be overcome and who has consulted the literature on nonviolent struggle and in other relevant fields.

It was in 1961 that Papuans first raised their Morning Star flag. It is still illegal to do so. Will Papuans achieve their precious merdeka and see the Morning Star flag fly freely over West Papua? Not without a struggle. But the commitment to make that nonviolent struggle more strategic has never been clearer. And it is this commitment that will make the difference. One day, West Papua will be free.

Robert J. Burrowes has a lifetime commitment to understanding and ending human violence. He has done extensive research since 1966 in an effort to understand why human beings are violent and has been a nonviolent activist since 1981. He is author of 'The Strategy of Nonviolent Defense: A Gandhian Approach'. http://www.sunypress.edu/p-2176-the-strategy-of-nonviolent-defe.aspx His email address is flametree@riseup.net and his website is at http://robertjburrowes.wordpress.com