Pandit Jawaharlal Nehru: Not That I Do Not Admire Rama And Krishna But There’s Work to Be Done, And Not to Clasp Hands Before Idols While Misery and Slavery Beleaguer Us’ 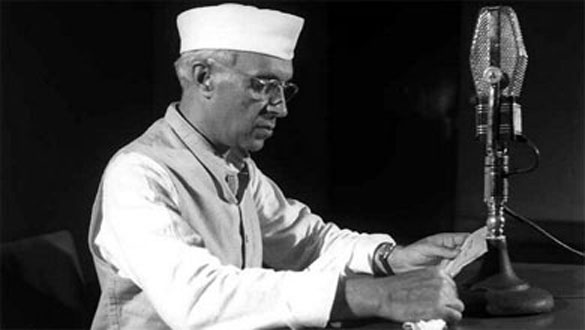 In such a state of mind (or being) I went to visit Jawaharlal Nehru. He was in the Black Forest in Germany, at some pension (imagine the Bodhisattva at a pension!)—his wife was dangerously ill, and the British government had freed him.

Staying with some friends in Alsace, at the medieval town of Mulhouse, I wrote to Jawaharlal. He said to come by the small train that crossed the border, and at Badenweiler station to walk up the hill (I still remember his saying, ‘Why take such a marathon walk?’) or preferably take a taxi. He also said to bring some Evian bottles for his wife.

So, clad in light autumnal clothes, perforated summer shoes, a vague overcoat, I set out on my pilgrimage—the three Evian bottles my offerings. And a book my companion.

Badenweiler is a staid, dumpy town. Almost a township, with its white villas, its arched-in avenues, and its sole sanctuary, the sanitorium up the hill. The thought of The Magic Mountain came to me, but I brushed it aside and switched on to Hsuan Tsang:

Then the Master of the Law thought with love of the Bodhisattva Maitreya, and turned his whole mind to the Heaven of the Blessed, earnestly praying to be born again there, in order to offer this Bodhisattva his respects and homage, to hear the excellent Law expounded, and to attain perfect understanding . . . All at once, in the depths of his ecstatic soul, he seemed to be rising up as high as Mount Sumeru, and after passing through one, two, three heavens, he seemed to see in the Palace of the Blessed, the venerable Maitreya, seated on a resplendent throne, and surrounded by a multitude of gods. At this moment he was floating with body and soul on an ocean of joy . . .

Lord, when I see your face, may it shine as that which brought compassion to man, quadruped and three, twenty-five centuries ago. If Mahatma Gandhi was a Visvamitra, Pandit Jawaharlal was the Bodhisattva. Lord, mayst thou have a halo round thy auspicious face!

I sat in the feebly lit corridor of the pension and opened the book I’d brought with me. It was Sur les Traces du Boudha by René Grousset. I had meant to speak of this extraordinarily moving book to Panditji.

What a great thing it would be for India and the world (I said to myself) if Panditji were to declare: ‘Yes, of course, friend, this be my path. This, the sure, trodden, ancient way. The eightfold path to the knowledge of the root of bondage and freedom from sorrowings.’

Suddenly he appeared, Panditji did. He wore a light overcoat and felt hat, was rounder than I had imagined, and less tall. His lower left lip twitched and twitched again and made enchantment for anyone sensitive (as Panditji’s twitches spoke), and when he removed his hat the bald head was a shock. (I had imagined him with long locks of hair, curling and covering his elongated lobes like the Gandharan image of Gautama, the Buddha, from Hadda, at the MuseeGuimet in Paris.) His quick gestures, his sudden solipsisms, silences, his radiant recognitions, were not of any Jataka text. I was taken aback, having almost reeled into the contemporaneity of the world. I felt lost. Why had I come? Where had I come?

Panditji went up to his room quickly (he went to leave the manuscript of his autobiography, which he was then correcting) and came down, his passport in hand.

‘Let’s go to the bank first, and we’ll have our lunch afterward,’ he said. ‘Is that all right with you?’

‘Of course, of course,’ he remarked, and with one smile, so pure, so full, so shy, so all-feeling, he took me twenty-five centuries earlier—at last I’d reached Kapilavastu:

But the Future Buddha in his splendid chariot entered the city with a pomp and magnificence of glory that enraptured all minds. At the same moment KisaGotami ascended to the roof of her palace, and beheld the beauty and majesty of the Future Buddha, as he circumambulated the city; and in her pleasure and satisfaction at the sight, she burst forth into this song of joy:

Now I remembered my bottles.

‘Here are the Evians you asked for,’ I said.

‘How much did you pay for them?’ he asked, taking them and leaving them with the cashier.

‘For God’s sake what?’ he queried nervously.

Also read: Why Modi is using Nehru to try and demolish the Gandhi dynasty and Congress

‘What’s that got to do with it?’ he remarked with indifferent irritation. He didn’t know about my Kapilavastu.

‘Well, we’re not a nation of shopkeepers,’ I said. ‘That’s not the way I was brought up.’

‘We live in the world of today,’ he said, as if speaking to himself, and angry with me, with himself, and with the whole wide world around him. And suddenly we slipped back into our awakened silences, and so on to the indefinite definition of India.

At the bank it was curious to see his passport . . . he had a British passport. It never occurred to one that one was ever British. (Later in Paris once, Panditji, meeting some friends-of-India-looking woman, said, with a nervous, ironic twitch, ‘Do I look a slave? Who said I’m not free?’ There was no place for friendly tears. It was rather a demand for recognition. India, who could ever bind her?)

‘Why don’t you give me some of your hair?’ He laughed at the disorderly strands hanging around my head. They badly needed a barber’s care.

‘Take all you want,’ I said in true offering.

‘But how will it stick?’ He laughed again.

‘Oh, I suppose the miracle can always happen. In India . . .’ ‘So, you’re married?’ he interjected, following his own thought.

‘Yes, Panditji; you see only half of me,’ I whispered hesitantly. ‘I wish you could meet my wife. She is French. I’ve taken her to India, you know.’

‘She’s so Indian.’ I seemed to be apologetic.

‘Well, my cousin is married to a Hungarian. And why not?’ I was reassured.

‘Romain Rolland spoke to me about you,’ he said after a long silence as we were walking back to the pension. I still remember the sun was completely unaware of himself and the trees stood inordinately still. They seemed aching for a breath, a touch, an efflorescence of the non-contingential. Everything seeks its own death and discovery, for suchness alone is meaning.

‘You certainly believe in something, Panditji? In some form of Deity, in philosophy?’

‘Deity, what Deity?’ He twitched angrily. ‘Why Siva and Parvati, Sri Krishna!’

‘Three thousand years of that and where’s that got us— slavery, poverty.’

‘And incomparable splendour, even today.’

‘What, with twenty-two-and-a-half years of life expectancy and five pice per person per day of national income? We’ve had enough of Rama and Krishna. Not that I do not admire these great figures of our traditions, but there’s work to be done. And not to clasp hands before idols while misery and slavery beleaguer us.’

‘Yes, and after that?’ I asked, as if to myself, somewhat timidly.

He seemed angry, ‘Now, now, don’t make me say this matter is matter,’ he said, touching the table. He was trying very hard to cut meat. Obviously the knife was in need of care or Panditji was not over dextrous with his hands.

‘No, Panditji, I know you won’t.’ I was winning the battle.

‘I am not such a fool. I won’t. I also have my private philosophy.’

He was silent for a while. And I did not say anything. ‘Of course,’ he continued, leaving the meat to its fate, ‘of course there’s something else. All this sun and moon and earth and galaxies, they don’t hang about in some chaotic universe. You probably do not know, I studied the natural sciences at Cambridge.’

‘There’s an intelligence about the world. There’s harmony. I am convinced we’re linked to that harmony. Individually linked,’ he added with deliberation, and merged into such sorrowfulness that the earth seemed lighter with his pain.

‘So God is mathematical.’

‘A creature of the “eighteen aggregates”.’

‘Yes, Buddhism comes quite near it; that is, there is something which must be, and which connects and sustains.’ ‘But that’s Vedanta,’ I interrupted. ‘The Buddha was a phenomenologist. Beyond manifestation, the void.’

The meat by now had become cold. So had my spinach. ‘Go where you will,’ he said slowly, and with a deep wealth of rising sensibility, ‘man is not a creature of accident. Nor are his apprehensions gratuitous. Man is a whole and he belongs to . . . to, well let’s say a universal harmony.’

He lit a cigarette. The coffee had come.

This excerpt from The Meaning of India, philosophical essays written by Raja Rao, has been published with permission from Penguin Random House India.