The Best Books on Egypt: Start Your Reading Here

Palace Walk is the first novel in Mahfouz's sumptuous Cairo trilogy, a three-generation saga set in the early 20th century. The trilogy, regarded as his masterwork, runs from after the first world war to Nasser's overthrow of the ancien regime in 1952. The rich, intense story offers an inside view of modernEgypt as the country attempts to emerge from British occupation and forge its own identity. Palace Walk tells the story up to the 1919 revolution against the British.

Al-Sayyid Ahmad Abd al-Jawad, a prosperous merchant, rules over his wife, three sons and two daughters with an iron hand. He runs his family strictly according to Qur'anic principles and demands unquestioning obedience. But his own behaviour is far from irreproachable as he indulges his desires for fine wine and voluptuous women. 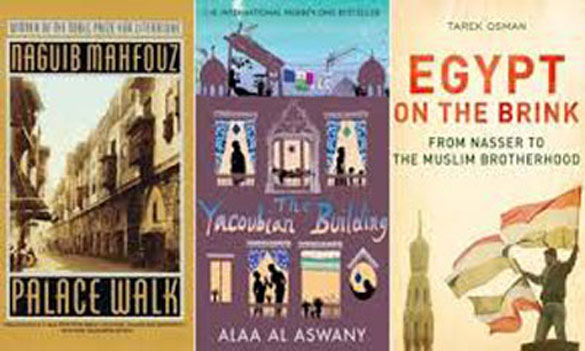 The best books on Egypt: Palace Walk by Naguib Mahfouz, The Yacoubian Building by Alaa Al Aswany, and Egypt on the Brink by Tarek Osman

Mahfouz paints an intimate portrait of the al-Jawads with humour and great attention to detail. Their trials and tribulations mirror those of their changing country. As Egypt struggles to end colonial rule, the al-Jawad children struggle to break free from their father's tyrannical control.

Mahfouz, the Arab world's most celebrated novelist, won. He survived an assassination attempt by Islamists in 1994, and died in 2006.

Sex and the city loom large in the lives of the Yacoubian building's inhabitants. The once grand, now decaying apartment block in central Cairo houses a rich cast of characters, whose stories Al Aswany weaves together to portray contemporary Egyptian life.

The taboo-busting novel tells of Cairo's residents going about their lives and encountering corruption, police brutality, sexism, homophobia and religious extremism – all seething under the surface of then President Hosni Mubarak's sclerotic regime. Among the bustling building's residents are poor squatters living on the roof, an ageing playboy looking fondly to a bygone era, a gay newspaper editor in love with a policeman, a bitter doorkeeper's son who seeks solace in militant Islam, and a woman who puts up with sexual harassment at work so that she can keep her job and support her family.

The novel reflects the frustration Egyptians feel in a society where money and influence are prized above all else; it offers a damning indictment of the powers that be.

A dentist by profession, Al Aswany opened his first clinic in Cairo's real-life Yacoubian building. He says dentistry is his "window on Egyptian society", which is no doubt what spurred him to write one of the biggest-selling novels in the Arab world.

Egypt on the Brink by Tarek Osman

Egyptian writer and commentator Osman provides the back-story on why people took to the streets to oust Mubarak in 2011. He casts a shrewd eye over the six decades since Gamal Abdel Nasser's 1952 revolution, taking stock of all the main players – Islamists, liberal capitalists, Coptic Christians, the army and young Egyptians. The last are a force to be reckoned with: the almost three-quarters of the population aged under 35 provided the "fuel for the revolt" that toppled Mubarak.

Nasser galvanised national – and Arab – pride, but ultimately failed to deliver what was promised. He created "a suffocating military bureaucratic system … [and] Egypt remained throughout [Anwar] Sadat's and Mubarak's administrations at heart a police state with a sad human rights record".

Egypt's patrons in Washington – the country is the biggest recipient of US aid in the Middle East after Israel – chose to turn a blind eye to the sham democracy because of the oft-raised spectre of the Muslim Brotherhood seizing power and forming a hostile Islamist regime.

So, has Egypt seen off its last strongman? Disturbingly, Osman says: "There is much in Egyptian history and traditions that predisposes Egyptians to expect and accept authoritarian rule."