Exploring Religion in our Time 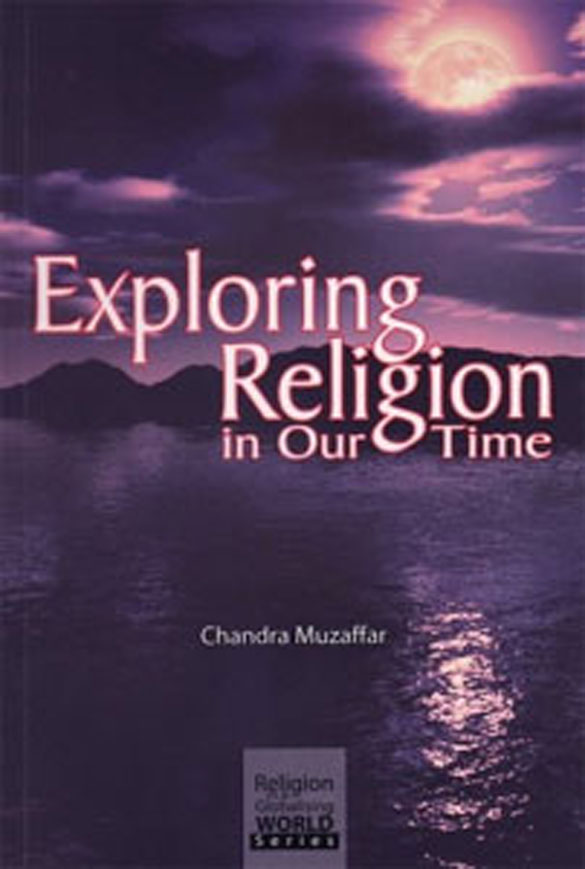 Religion is an important component of human society. Although the advent of secularism, spread of enlightenment and progress in science has not posed an inimical threat to the religiosity of masses, but certainly religion is considered as a part of the problem. Common people need something to believe in and a worldview that will grant meaning to their lives. Religion has the potential to offer this meaning and solace to the disturbed souls on the one hand and on the other it does interact with institutions. The relationship between science and religion, secularism and religion, politics and religion is entangled in debates, discussions and deliberations about the scope, influence, impact and interaction of the two.

In the book titled Exploring Religion in our Time, contemporary academic, activist and polymath Chandra Muzaffar, deliberates about various themes and questions related to religion and how it engages with the current challenges and prevalent institutions of our times. In his Foreword, Prof. Muddathir Abdel Rahim writes, “The book examines the nexus between religion and state and evaluates the positive and negative impact of religion in the public sphere. While clearly depicting the struggle between retrogressive and progressive trends in various religions,  between the advocates of an exclusive approach towards religion and the proponents of an inclusive understanding of faith, the book persuasively argues that the worldviews, values, attitudes and philosophies of the many religions of the world-despite their numerous and important differences-have the potential to create a more just and compassionate civilization capable of saving humanity from the real danger of mutual annihilation and total destruction-not only of human life, but of all forms of life-which presently threatens its existence on this small planet earth.”

Chandra while introducing the book writes in the Preface, that it “grapples with some of the most fundamental issues in the interface between religion and society. Drawing upon the experiences of various religions in the contemporary setting, with peeps into history, the book evaluates the positive and negative impact of religion and state and how religion has become a powerful conduit for protest in a number of societies. It shows how the drive to establish global hegemony by the elite in the United States and their allies has reinforced a siege mentality among some religious groups and in the process strengthened certain retrogressive trends in the articulation of faith.”

The book is divided into four chapters, which makes the reader grapple with various trends that are born with the interaction between religion and society, including politics. What part religion plays in society, poverty its impact, how neo liberal policies drive people towards religious resurgence, are important queries that Chandra answers. Issues of identity and superficial religious concerns, how Hijab becomes the central theme for most religious groups are deliberated. How political and ethnic conflicts are escalated or exacerbated by religion are engaged with. Further how the hegemony of imperial powers is helping religious resurgence, coupled with the fact that deeper understanding of religion and its spirit is missing. These pertinent challenges are discussed with an academic acumen.

Muslim scholars have vehemently criticized the communist model of economy and communism as an ideology. But the failure to rebut or even understand the vicissitudes of capitalism is something that still baffles them. Chandra observes very well, “Muslims more than adherents of other faiths-want to live in accordance with the tenets of their faith in the contemporary world. For them, Islamic teachings are as relevant today as they were 1432 years ago. But Muslims have not been able to develop a truly comprehensive vision of society which can then be translated into specific institutions, laws and policies and offered as an alternative to the existing global capitalist order. Muslim religious leaders and other Muslim intellectuals have not been able to harness the universal values and principles of the Qur’an, often reinforced by the Sunnah, and construct a methodology for their application to the 21st century.” (P-22)

Religion as a protest movement and in power has different lived realities and pragmatism though it cannot be generalized. The response of Muslims is variegated regarding use of religion as a protest and in power particularly by states. Religion certainly as a protest is without the state patronage. Liberation theology as a new interpretation of religion is appearing as a new empowering discourse, which is gaining ground as the theological narrative. So the religious values need to be emphasized. Also, the narratives and discourse of Islam should articulate teachings that are in symphony with Quranic concepts.

Globalization, conflicts, materialism, secularisms as a reaction to religion, elite corruption all is responsible for reinforcing the identity consciousness among people. These all aspects have resulted in more reinforced consciousness about religion, identity and community. So to overcome this negative exclusive identity need is to discover more plural roots of religion as Chandra, suggests, “Indeed, in a globalizing world it is only an inclusive, accommodative, universal vision of Muslim identity which will enable Muslims to work together in a spirit of comradeship with people of other faiths and people who do not subscribe to a particular faith or to any faith at all, for a better, more just and peaceful world. Within every religious community, such an inclusive, accommodative, universal perspective on identity will have to make its presence felt.” (P-57)

Religion also has a role in providing answers and helping us overcome the challenges and issues like fuel crisis, environmental degradation, elite selfishness, resource depletion, radicalization, violence and other such allied issues are discussed in these chapters. These all have a relation with religion and certainly religion can help to resolve these issues. Religion as a positive force having a strong influence to mitigate the current crisis has been least explored and engaged by the scholars. Chandra Muzaffar has the distinction of engaging with this virgin area and offer solutions that depict the positive role of religion. This book is a welcome addition to the literature that explores role of religion in resolving our contemporary challenges. Chandra needs to be congratulated for his laudable effort in this direction.

An occasional columnist for NewAgeIslam.com, M.H.A.Sikander is Writer-Activist based in Srinagar, Kashmir