Exploring the Principles, Concepts and Themes of the Quran

Quran is the fundamental text of Islam. Every Muslim has a special relationship with Quran, the divine text that defines what it means to be a Muslim. Every Islamic revivalist movement has based its efforts and struggle on the basis of this text. From the last fourteen centuries since its revelation the Holy Quran has been translated and its message commented upon in different languages of the world.

The process is still continuing and in every age scholars have tried to understand the meaning of the divine message and interpret it according to their own intellect, era and acumen. This process will go on till eternity as message of Quran is universal and timeless. Every age will attempt to understand the divine message and the current book as the title suggests explores the various contours of this divine message, written by a young academic Tauseef Ahmad Parray. He is a new emerging scholar and prolific writer whose writings and research papers are regularly published in different journals and newspapers. This book establishes Parray as a serious scholar of Quranic studies. 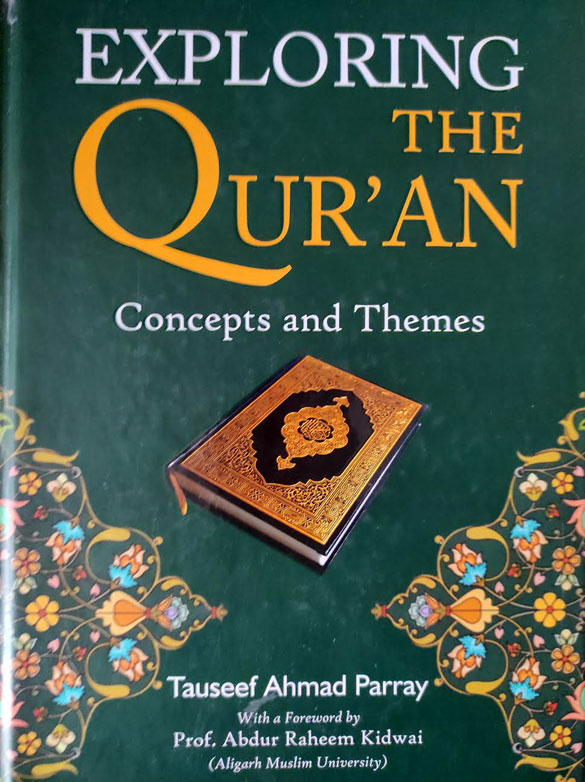 Exploring The Qur’an: Concepts and Themes

In his Foreword Prof Abdur Raheem Kidwai, an academic and doyen of Quranic studies writes that Quran has its own discourse and its own idiom that many readers do not fathom. Prof Kidwai is all praises for Dr Parray’s intellectual efforts, “More importantly these bring out the relevance and timeliness of the Quranic guidance in our times. Dr Parray is to be complimented for raising and addressing these concerns of the day……Dr Parray has enriched the field admirably and facilitated a better understanding of the eternal source of guidance. So doing he has accomplished a task which promotes goodness and makes this world a better place to live in.” P-12

In his Preface Dr Parray writes about his work in these words “The present book is a humble effort in the thematic study of the Sacred Text. It consists of twenty two (22) topics on various key terms, basics concepts, vital and vibrant themes of Quran and things Quranic and some (constantly contested) contemporary issues.” P-24 the understanding that we get from reading this book is that Quran’s interpretation cannot be universal and needs perpetual interpretation and a new one in every age. Dr Parray has done the literature review of Quranic studies, both of the works of orientalists and Muslim scholars. He engages with the epistemology of how the Quran was approached in different periods by various scholars. The engagement with this scholarship makes the book quite unique.

The subsequent chapters deal with Ibadah, Ikhlaas, Aql, Tadabur, Taffakur and many such themes. These all are Quranic terms and he has documented how many times they have occurred in Quran thus indicating their essence and emphasis. The topics about Ethics, morality, universal values like Justice, Peace and Pluralism have been engaged alongwith pertinent questions related to marital relations, obedience towards parents and conduct with relatives and neighbors too have been commented upon in the light of Quranic message.

Quran aims to build and construct a moral society so the rights of others and one’s duty and responsibility towards family, neighbors, relatives and society becomes very essential. The relationship with God is the basis of faith but one who fails to fulfill the rights towards others is condemned by the Quran and Islam. Being dutiful towards others and carrying out one’s obligations is what renders a person as true Muslim. Any negligence on this account renders one guilty of sin, further any violation of the rights of others is severely admonished and consequences in the form of grave punishment in the Hereafter have been announced by the Quran.

The principle of rise and fall of nations too has been articulated and different values that are responsible for the progress and prosperity of a nation and variegated vices like corruption that lead to the fall of nations are discussed. The Quranic principles do not exempt muslims and they too are experiencing and existing in decline because they have disregarded the true message of Islam and fundamentals of the Quran. The real strength of Islam is in its creative application of reason to answer the contemporary challenges, a concept known as Ijtihaad. But since the last many centuries, Ijtihaad has been put on back burner and not implemented due to number of reasons. This non application of Ijtihaad has resulted in the stagnation of the Muslim mind. Plus few scholars who do indulge in Ijtihaad are being condemned by the redundant Muslim clergy.

Pluralism is the essence of the current century and Islam too advocates it, as Quranic principles do enshrine it. But the problem with pluralism is that it is a new phenomenon and the society in which Islam evolved was quite alien to what pluralism stands for, as it was a period of religious persecution not freedom to practice any religion. To define Islam as advocate of pluralism is quite problematic, contextual and relative. It is a principle of Quran to offer freedom of religion to everyone, and in Muslim societies this principles is still prevalent but then juxtaposing this concept of pluralism on the tribal society of Arabia is exaggerating it too much. Modern civilization has resulted in birth of many new ideas and values and it does not go well to interpret Quran in the shade of every new ideology and trend of the times. The question of pluralism needed more explanation and analysis, that author has avoided.

The book is a very good contribution to the Quranic studies and offers the reader a basic understanding of divine book. The principles, concepts and themes of the Quran have been explained in a lucid manner that adds to the merits of the book. The cover of the book is quite attractive and the publisher needs to be complimented for publishing such an attractive work. Dr Parray has a verve and penchant for writing and we hope in future he will continue his literary and academic works for the general benefit of the masses.