The Path Could Not Be Traversed Without A Master: Elif Shafak – Part 2

Shams is in Konya in October 1244. Come Friday Shams goes to the mosque to hear Rumi. Rumi talked about God quoting Quran very impressively but he said, “What brings us even closer to God is suffering.” This is what does not go well with Shams: “How could a man so well placed in life with wealth, respect, reputation and fame, happy family life know anything about suffering. This is not fair”. 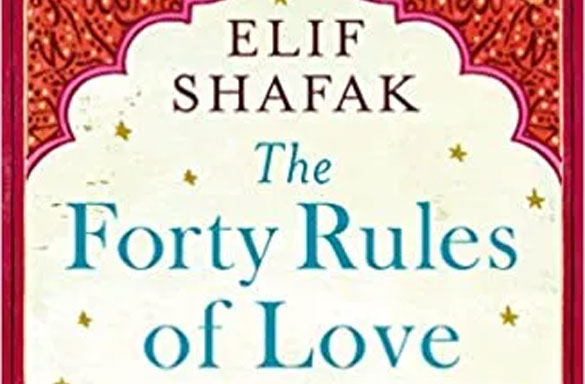 At this juncture contrast Rumi’s way of life with that of Shams, understanding the symbolism in either.

Shams takes residence in a room in the inn of sugar vendors. Where there is sleeping mat with a mouldy blanket, an oil lamp that was sputtering, and a sun–dried brick as a pillow and a good view of the whole town up to the base of the surrounding hills, the room is of his own choosing.

Konya, October 31, 1244. “Blessed is the day I have met Shams of Tabriz”-Rumi. Friday. Rumi has given his sermon in the mosque. Riding a horse whose mane is braided with strands of gold and tiny silver bells. At every step he enjoys the tinkling of the bells. He is homebound accompanied by a crowd. Shams, from a balcony of the inn of sugar vendors takes a look on this pompous procession whose star attraction is Rumi.

Here the encounter should begin breaking the idol of materialism. Shams joins the crowd. A wandering dervish looking strange. No hair, no beard, no eyebrows, with an expression inscrutable. A wandering holy man with piercing eyes exuding an aura of self-sufficient competence. Shams raises his arms high and wide as if wanting to halt not only the procession but also the flow of time. Not only the rider but the animal also is nervous, becoming unruly. Shams waves his hand. The animal is calm. ‘Black Magic’, mutters someone from the crowd.

Oblivious of the crowd Shams speaks, “Oh! Great scholar of East and West I have a question, if I may”. Go ahead, says the Maulana, but the dervish has already turned his back and is walking away. “Hey! Wait, please. I want to hear your question”. But get down of the horse first, says the dervish. Rumi obliges.

Now the question at the outset is blasphemous and we will have to bear with it till the problem is resolved by the great scholar himself–and Shams succeeding overhauling Rumi. “All right do tell me please, which of the two is greater, do you think –the prophet Muhammad, or the Sufi Bistami’. “How can anyone compare our venerated prophet, may peace be upon him, the last in the line of prophets, with an infamous mystic?” Rumi’s counter question. Unmindful of the crowd Shams says “please, think about it”. Didn’t the prophet say, “Forgive me, God I couldn’t know thee as I should have”. While Bistami proclaimed, “Glory be to me. I carry God inside my cloak”. If one man feels so small in relation to God while another claims to carry God inside, which of the two is greater”? Scholarship is futile if it does not bestow wisdom, understanding and intellect to the cultivator to winnow grain from the chaff. 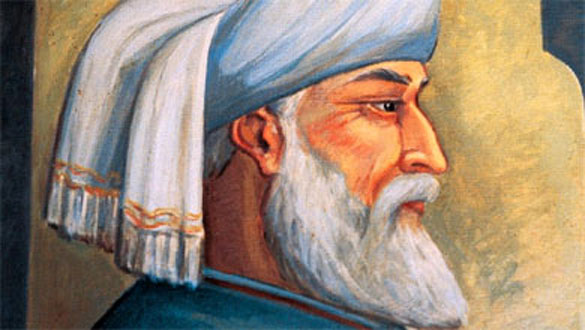 Rumi was a philosopher with philosopher’s stone. He says: “I will compare the two statements and tell you why, even though Bistami’s statement sounds higher, it is in fact the other way round. “I am all ears” Says Shams. Rumi continues: “You see, God’s love is an endless ocean and human beings strive to get as much water as they can out of it. But at the end of the day how much water we each get depends on the size of our cup, some people have barrels, some buckets, while some others have only got bowls. Bistami’s container was relatively small, his thirst was quenched after a mouthful. He was happy in the stage he was at. It was wonderful that he recognized the divine in himself, but even then there still remains a distinction between God and self. Unity is not achieved.

As for the prophet, he was the elect of God and had a much bigger cup to fill. This is why God asked him in the Quran, ‘Have We not opened your heart? His heart thus widened, his cup immense, it was thirst upon thirst for him, no wonder he said’, ‘we do not know You as we should’, although he certainly knew him as no other did”. What an encounter! It may be a novelist’s imagination but this is how Shams –Rumi dialogue must have happened. Rumi realizes that while Shams the drunk had put the unsavoury question to him, it was only to make him realize that at what stage of the path he was at.

Rumi is raptured. He finds a companion and so does Shams. He takes Shams home much to the displeasure of his wife Kerra and son Alladin. The path could not be traversed without a master. The two lockdown themselves for forty days in a room to know, to understand, to merge, two, but vibrating on the same wavelength. Gone is the preacher Rumi, scholar after books, a seeker of soulless religion. A new Rumi comes into being. God intoxicated, a lover, a poet, a whirling dervish with Hu on the stainless white hem of his cloak.

The story goes, well known. There is a well in the courtyard of Rumi’s house. One day Shams throws Rumi’s books into the well. Precious valuable books. Ghazali’s Incoherence of philosophy, his Revival of Religious Sciences also goes to water. Rumi watches. Master knows the best.  But Kerra is angry. ‘Why, why on earth Rumi did not allow her enter his library even for dusting and here the books are destroyed, Rumi watching. Black Magic or what, Shams produces the books backs. May be myth, but underneath myth truth and reality lie hidden. Puppets on the stage are in the hands of the Puppeteer.

Hard taskmaster, the Sufi Shams Tabrizi one day orders his disciple to go to the tavern to bring two bottles of wine home.  Rumi goes. Rumi in tavern. Talk of the town. Is seen carrying the forbidden drink through the street.  Shams waters the rose bushes with them. Roses glow but something is destroyed. Rumi in tavern.  Rumi’s reputation.  Nothing of the self on the path. Only the pure soul full of love. Like Browning, “But I will pour floods of love and hide myself”. What happens? Rumi a universal poet of love, sweet for both East and West. Sublimating human heart from stone to water that renders everything green on earth. His poetry, a spiritual odyssey is a boon to humans for all time to come.

Shams in Konya is viewed as a bad influence on public morality, on religion and on Rumi.  He is an outcast heretic. Even Rumi’s happy home is affected. Rumi’s family – his wife Kerra, his two sons, Sultan Walad and Alladin, adopted daughter Kimya, Desert Rose The harlot (how? Wait!) and Shams the wrecker, –The God sent cup- bearer of the nectar for Rumi. Of the two sons Sultan Walad the eldest is tolerant to his father’s change of track but Alladin the worldly is uneasy. It is a life of austerity now against that of plenty. Alladin with other evildoers murders the torch bearer of the path to the throne–Shams of Tabriz.  Blasphemy should face death.

Shams is used to meditation at night in the courtyard of Rumi’s house. The seven killers including Alladin enter the courtyard stealthily. Baybars – the security guard of the Jamia Masjid of Konya, the tormentor of Desert Rose is one of the killers. There are different accounts of ‘Shams’ murder. Poet Maulana Jami quoted by Nicholson, states: “when Shams was struck by knives and daggers, he cried. The cry was so huge that all seven killers were dumbfounded, falling to the ground. When they came back to senses, they saw only a few drops of blood on the ground. No trace of the spiritual monarch ever after.” Another account mentioned by Shafak: They threw his corpse into the well. Sultan Walad of Konya had a dream– Shams telling him, ‘I am in the well.’ Secretly at night the Sultan comes with his party, takes Shams out of the well and it is interred secretly. ‘Rumi bemoans’, they killed him. They killed him.

Display oh sun (Shams) who art Tabriz’s glory, the dawning of love; I am the hoopoe:  the presence of Solomon   is my desire (Rumi)

Who is desert rose? A brutalized innocent village girl conceived by Shafak in horror image of utter heartbreak, like Shakespeare creating Cordelia. Rose is a victim of unmanly wantonness becoming eventually barren. Patron of the brothel in Konya gives her the name Desert Rose –Rose barren like a desert. One-night Baybars the brute crosses all limits with Desert Rose. Beauty and the beast. Ironically same Baybars is the security guard of Rumi’s mosque. That one-night Baybars, the killer of Shams Tabrizi, commands Desert Rose to be his mistress. Objectification personalised. She refuses. Baybars does violence to Desert Rose –kicks, punches, slaps, hair pulling, dashing to the ground. Desert Rose is badly bruised, bloodstained. That same night she leaves the brothel. Shams of Tabriz a wandering Dervish, comes to her rescue and the shelter – where else than in Rumi’s house.

It happened with a Muscovite girl suffering Stalinist persecution in Siberia who wrote in her diary, “God, do not judge, you were never a woman on earth”. It happened with Yazdi women in Iraq. With Mukhtara Mai in Pakistan and with many others in conflict zones such as Bosnian women at the hands of Serb army. It happened in the past in war. It happens at present in war. When shall this stop? Alladin, displeasing Rumi’s son, now a convert, finally observes “There he is gone (Shams Tabrizi), there are traces of him everywhere. Dance, poetry, music, and all things that I thought would vanish once he was gone have stayed firmly planted in our lives. My father has become a poet. Shams was right. When one of the jars was broken, so was the other jar. ‘My father had always been a loving man. He was kind toward not only Muslims, but also Christians, Jews, and even pagans. After Shams came into his life, his circle of love became so vast it included the most fallen of the society, prostitutes, drunks, and beggars, the scum of the scum. I believe he could even love Shams’ killers.

There was, and still is, only one person he could not love: his son”.

Ella and Aziz encompassed by mystic humanness of generosity and composure return to their states of life. Aziz having seen Ella, staying three days in Boston, flies back to Amsterdam to serve the refugees. Ella is back to her home in Northampton in purity of her soul and heart. Aziz dies of cancer in Amsterdam. Ella flies to Amsterdam to help the refugees. FORTY RULES OF LOVE is inspiring literature.

First Part of the Article:  Excavate the Old and Examine the Modern: Elif Shafak – Part 1