Islam Is 'A Message, Not Government; Religion, Not a State’: A Review of Egyptian Scholar Ali Abdel Razek's Essay 'Islam and the Foundations of Political Power' 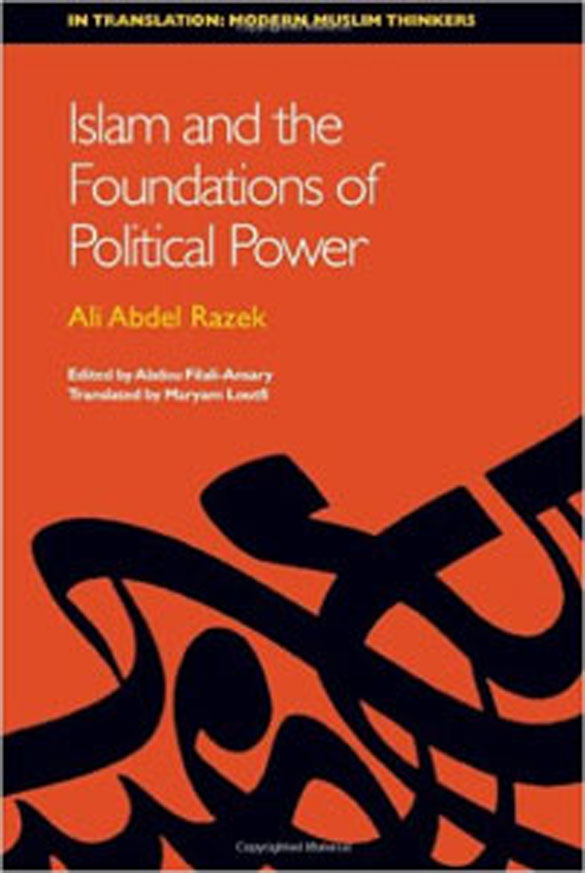 It is somewhat astonishing that ʿAli ʿAbd Al-Rāziq’s Al-Islām Wa-Uṣūl Al-ḥukm, one of the most discussed and most significant books of early twentieth century Egyptian, Arab, and Islamic intellectual history, should have gone so long without a translation into English. Its appearance, in Edinburgh’s ‘In Translation: Modern Muslim Thinkers’ series, is therefore especially welcome. Following

Abdou Filali Ansari’s French translation published in 1994, this new translation is the product of a joint effort by Maryam Loutfi with Aziz Esmail and Filali Ansari, who both (as the Preface informs us) reworked aspects of the English version.

The essay’s historical and continuing significance is expounded in a 17-page introduction by Filali Ansari, which draws particular attention to the importance of the author as representing a liberal-modernist current of modern Islamic thought often overlooked by readers in the West, where works by (for example) Hasan al-Banna or Sayyid Qutb have long been available, and widely circulated and commented upon. There is also a brief but valuable, personal prefatory note by the author’s grandson, recalling his character as remembered from childhood that serves to ground the text in a testimony of the author’s personal piety. As well as reproducing ʿAbd al-Rāziq’s original footnotes, the editors have added their own explanatory notes where necessary, as well as an appendix listing the sources and classical authors referred to by the author. These additions are all very helpful, and make the text very accessible and usable both for students and scholars of Islam who might be familiar with the work (for most, perhaps mainly from other sources referring to it) and for the general English-language reader encountering it for the first time. The short text is presented in the same format as the Arabic printing, following the chapter and section divisions of the original (although some of the section numberings differ from the first, 1925 Cairo edition), which makes for a somewhat unusual style in English. The essayistic tone of the original may be a little lost for English readers, seeming somewhat fragmented, as a result; but on the other hand, the traditionally scholarly, point-by-point elaboration of ʿAbd al-Rāziq’s argument is emphasised, allowing us to appreciate both the relative novelty and (as the Introduction points out), just as importantly, the relatively traditional nature of the work.

ʿAbd al-Rāziq’s constant reference to the Qur’ān emerges especially clearly. Concern for ease of understanding might occasionally lead the translator to be slightly too expansive: for example, the line of poetry quoted at the end of Book One, Bānū Fa-Mā Bakat Al-Dunya Li-MaṣraʿIhim (‘They departed, and the world wept not for their ruin’) is rendered ‘The Caliphs were gone. The world did not lament their death’ (p.56), which certainly conveys ʿAbd al-Rāziq’s idea at this point (discussing the fate of the last ʿAbbasids in Mamluk Egypt), but does so in more explicit terms than he himself used. More generally, though, the translation is both faithful and felicitous, conveying clearly ʿAbd al-Rāzik’s pugnacious (occasionally slightly sardonic?) prose as well as the very earnest and heartfelt conviction of his writing, especially in the central passages distinguishing prophetic from political authority, and emphasising the unique and irreducible nature of the Prophetic mission (ch.5, and pp. 82-86, 106). One aim of making this work available is explicitly to bring ʿAbd al-Rāziq’s arguments—most concisely expressed in his own formula, Risāla Lā ḥukm, Wa Dīn Lā Dawla (‘[Islam is] a message, not government; religion, not a state’)— into current debates both within the Muslim community and among non-Muslim scholars and the wider public, making this position and its historical grounding better known than they perhaps have been. How effectively ʿAbd al-Rāziq’s own essay, which necessarily reads today more as an historical than as a contemporary intervention, can achieve this might be open to debate — though this is certainly a discussion worth having. The concern, apparent in the framing of the translation, with presenting an ‘orthodox’ author very far (as indeed he must have been) from the radical secularism sometimes imputed to him, is no doubt in itself an important historical corrective. Filali Ansari’s introduction also situates the work in its own context, particularly stressing its importance in sparking what might be seen as the first major ‘public-opinion’ controversy of modern Middle Eastern history.

Further discussion of this, including perhaps some greater attention to the book’s critics, some of whom were themselves modernist-reformist thinkers, would be welcome, and might indeed be furthered by the availability of this translation. This is, then, a valuable contribution to scholarship, however long overdue. James McDougall