A Call for Spiritual Renewal 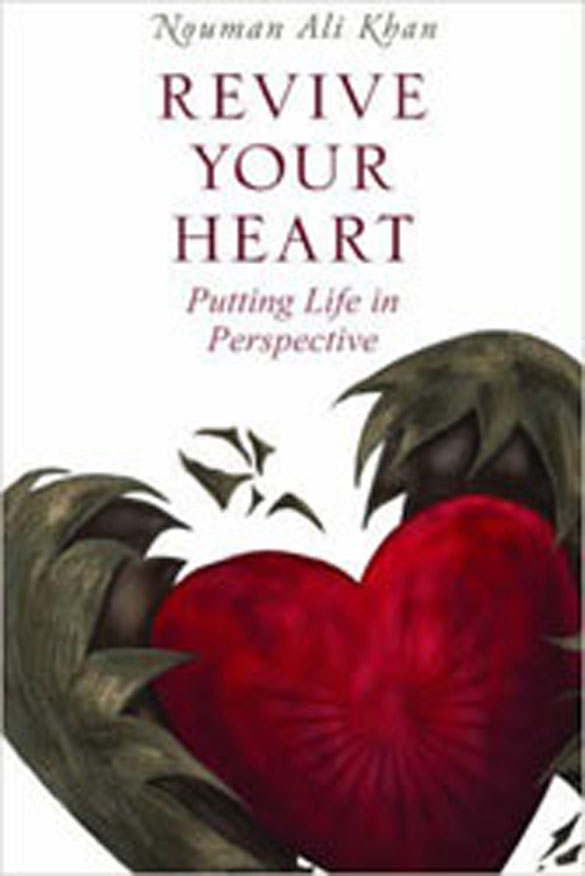 Revive Your Heart: Putting Life in Perspective is a call for spiritual renewal. This collection of essays urges us to make basic changes in our life and to revise our actions, assumptions and thinking so that we can be transformed from within as well as externally. It aims to help modern Muslims maintain a spiritual connection with God and to respond to many challenges facing them today, such as disunity among Muslims, terrorists acting in the name of Islam, and disconnection from God. All these and more are tackled by Nouman Ali Khan, with his profound engagement with the Quran, in a very inspiring way.

A great book should be a guide and leave a lasting impression on the minds and hearts of readers.  If one can gain lessons after reading it and apply them in one’s everyday life, it’s all the more great—and this is precisely one such book!

Khan, 38, is a speaker and founder and lead instructor at Bayyinah, an institute for Arabic and Qur’anic Studies.  Born in Berlin, Germany, he currently resides in the USA. He has been named one of the 500 most influential Muslims in the world by the Royal Islamic Strategic Studies Centre of Jordan.

In this book, Khan deals with a range of issues, from the highly personal to the global, with great finesse and in a wonderfully easy conversational style, appealing to us to rethink what we are doing with our lives. Consider these pearls of wisdom, for instance:

“The world today is abuzz with unrelenting activity. The developments in the world of politics, economics, social media, entertainment, technology… all vying for our attention. But more importantly, they are vying to distract our hearts. In line with the ideology of unfettered free markets, we are constantly being ‘exhorted’ to consume.”

Khan harkens us to rethink the hedonistic lifestyle that reduces human beings into atomized consumers and that can even make one’s religious life commodified into a form of entertainment. He points out the crisis of religious identity that Muslims are faced with today, with their global image being sought to be hijacked by violent groups misusing the name of Islam. These groups draw young Muslims, ignorant of their religion, into their ranks, through their domination of the headlines with shocking acts of violence.

Khan urges us that the only way for Muslims to come out of the morass that they find themselves in today is to connect with God. This is related to the need to put life in perspective, reminding ourselves not to forget the true nature of reality—including the fact that our lives here are temporary. Our short stay on this planet is a small window of opportunity to do some good in the world, for which God will judge whether we are deserving of Paradise or not after He takes us back to Him.

Khan’s stress on the need for Muslims to introspect and to shun extremism is enormously important, at a time when extremism in the name of Islam has engulfed parts of the world and when traditional institutions of learning have been reduced to ruin by wars and corrupt scholars. Khan minces no words while speaking on the current chaotic state in most Muslim countries today, for which Muslims themselves must recognize their own role and responsibility, including their erroneous interpretations of Islam, that causes immense suffering (to themselves and to others). For instance, he writes:

“I argue Islam is being ridiculed because of how Muslims appear, what Muslims have become, how we carry ourselves, what our societies look like, what the streets look like in our  neighbourhood, what our homes look like, what our business practices are like, what our governments are like. If you want to look at examples of corruption, if you want to look at the exact opposite of a civilized society, travel through the Muslim world-much of it. It’s hard for us even to be civilized in the parking lot of a Masjid, for God’s sake. The only time we are organized is when we have to be organized in Sufuf (rows), when Salah is called, but outside of that—forget about it! Just basic human decency, basic human decency, we don’t possess. We don’t possess it. What have we done? What have we produced as a people? How have we contributed to the world? The only time we make it to the news is when we blow something up or we are in some chaos or another […] We have lost our moral compass and I am not talking about advanced knowledge of din, Fiqh and Shariah, I am talking about basic morality people, basic, basic morality. We have to show that religion is not a way to close the mind, close the heart and close the eyes. It is the way to open the mind, to engage in dialogue and bring civilization to humanity”.

Revive Your Heart-Putting Life in Perspective will tug at your heart-strings. It is an inspiring call to live life the way God wants you to, not the way you might want!

It is hoped that this book will contribute to inspiring modern Muslims to become sources of light in our world through re-orienting their outlook towards greater God-consciousness, greater compassion and greater social responsibility.