The Poetry of the Taliban: A Lesson You won’t Forget

Poetry of the Taliban 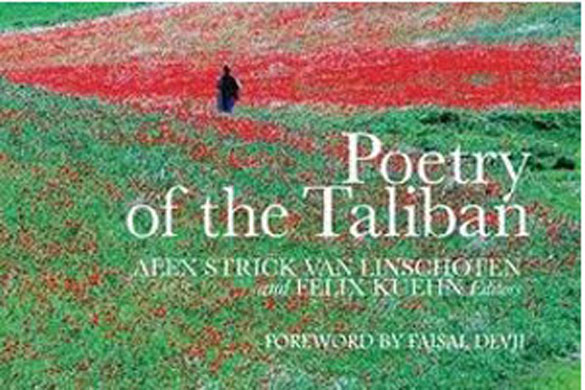 An old Persian adage goes Mushk aan ast ki bebooyad, na aan keh attaar begooyed (a great perfume announces itself by its fragrance, it’s not the one that the perfumer says is good). Well, up until recently most did not realise that the Afghan Taliban are the contemporary torchbearers of the great secular, or religious, tradition of Pashto, Persian (Dari) and, additionally, Urdu poetry. Enter the perfumers Alex Strick Von Linschoten, Felix Kuehn and Faisal Devji. The trio is here to tell you about the musk of the Taliban verse that you may have been missing out on. Alex and Felix — as the editors like to call themselves — have come out with an anthology of the verse composed by Taliban members, fellow travellers and people living under their rule.

Poetry of the Taliban is a selection of 235 poems from a repertoire the editors have collected over the years, including from the website of the Islamic Emirate of Afghanistan. Mirwais Rahmany and Abdul Hamid Stanikzai, based in Herat and Kabul, respectively, have translated these poems into English. The work claims to be aimed at preserving and introducing to the world what Faisal Devji calls the Taliban movement’s ‘aesthetic dimension’. The editors maintain that “the very idea of members of the Taliban writing and publishing poetry undermines many of the traditional stereotypes we hold dear about them.”

The book is organised into a rather massive preface and introduction — consuming 35 pages between the two — and the actual poems. The poetry section is subdivided into six categories corresponding with the time-period and/or themes: Before September 2011, Love and Pastoral, Religious, Discontent, the Trench, and The Human Cost. The Before 09/11 section opens with the poem ‘I am still talking’:

Like a candle, I laugh in public and cry in secret,

I can just chirrup like a scream and then I disappear.

If the enemy is trembling and escaping from me,

He would certainly do it while I am being buried...

I am still talking with the pen’s tongue.

I will teach you a lesson as an example,

God willing, you won’t forget it.

If one is at a loss to appreciate the literary merit in this or the majority of the poems, it might not be because of unfamiliarity with Pashto, which according to the editors is the exclusive language of the Taliban’s poetic expression. One can try hard to imagine what the original Pashto lines may have looked like but after experimenting with about 40 long and short poems, it does feel like a losing battle. It is impossible to discern the form, style, literary devices, diction and context of virtually any poem. And really the Taliban poets are not to blame for this. If one finds oneself reaching for the choice medicine for headache or vertigo, or both, its responsibility rests squarely with the editors who have not included a single line of the original Pashto verse. Perhaps luminaries like the novelist Muhammad Hanif and historian William Dalrymple who lent their unqualified endorsements to the book, displayed prominently on the jacket, could also shoulder some of the blame.

For a work that purports to actually put forth a unique and authentic perspective on the Taliban, there is remarkably little that has been done to introduce the originals. While the editors maintain several websites related to their work, they have not bothered to archive any original poem there either. In fact, when asked on Twitter by a Pashtun for reference to the Pashto works, Alex Strick Von Linschoten directed that person to the Taliban website! The reason that the originals are needed is simply the editors’ assertion that “these poems are part of a long tradition of Pashtun poetry (although equally rich Farsi/Dari and Arabic traditions have played their role) stretching back hundreds of years...the genres, meters, themes, metaphors and emotional appeals are often similar or the same.” Faisal Devji has gone even further with his statement in the preface that “The Taliban poets, in other words, are very likely drawing upon the modern perspectives on these luminaries (Biblical and Quranic Prophets) that were pioneered by nationalist and socialist writers in the twentieth century.” One must insist on seeing the evidence, as these are tall claims that are extremely unlikely to stand closer scrutiny.

The Taliban poets, and the editors and Faisal Devji, have indulged in a lot of name-dropping throughout the book. The latter attempt to prime the reader by mentioning the greats of Persian and Pashto poetry like Rumi, Khushal Khan Khattak and Rahman Baba or the modern literary giants as Abdul Bari Jahani, Suleiman Laeq and Ajmal Khattak in the same breath as the upstarts they are about to introduce. What the trio calls the tropes used by the Taliban poets are nothing more than highly superficial mentions of several figures from Afghan history like the folk heroines Nazo and Malalai or the more widely known Ahmed Shah Durrani (Abdali) as well as the references to the rout of the British at Maiwand. It is a gross exaggeration to assume that merely inserting these names elevates the ploy to the level of literary devices like talmeeh (allusion). The poets, however, once again are not at fault. They are perhaps common people who dabbled in what is called in Urdu tuk-bandi — an ordinary attempt at composing verse with equally ordinary results — and were not vying for the literary pedestal hat Messrs Von Linschoten, Kuehn and Devji are bent on elevating them to. But literary merits or demerits do not seem to be the primary concern of the trio.

Just as the Afghan war and pro-war propaganda became an industry worldwide, especially in the west, the anti-war spiel is also a pretty hot commodity. The present work is an attempt to capitalise on the current western craving for some sort of a solution, no matter how flawed, to the Afghan imbroglio. The poets most likely just penned their feelings as is customary for the country and city folk in Afghanistan, Pakistan and India. Samples of such verse adorn in abundance the trucks crisscrossing these lands. But packaging such poetry in book format, complete with a feel-good jacket, without actually showcasing the original product is false advertising by the perfumers, and poor scholarship.