Islam Has No Role to Play in Politics: A Review of Ali ‘Abd Al-Raziq's Revolutionary Essay on Islam and the Foundations of Political Power 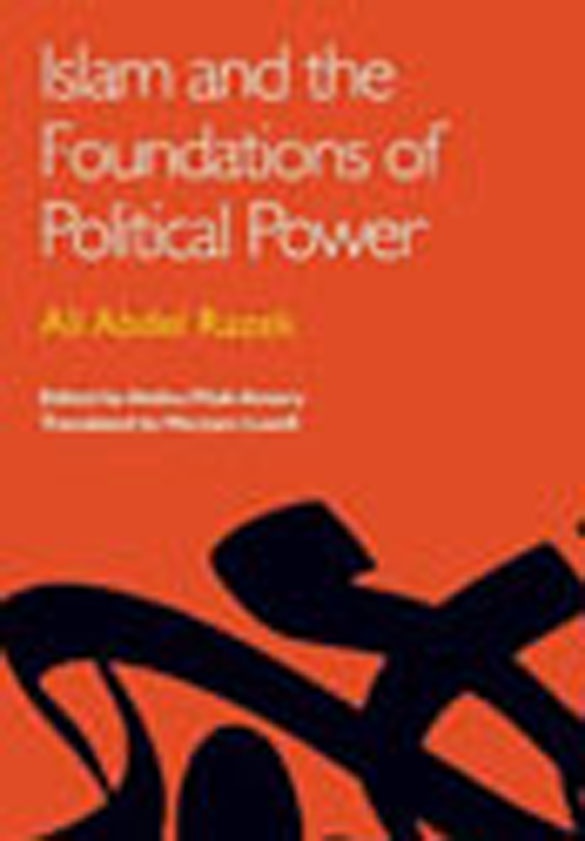 Religion, and Islam in particular, appear to be mainstays in discussions about politics in the Middle East. But while readers may be quite familiar with contemporary debates about the role of religion in Mideast politics, this phenomenon is far from a recent one. One of the seminal texts on the topic—one that generated a firestorm of criticism and debate—was published in 1925 by an Egyptian Islamic scholar and Al-Azhar faculty member, Ali ‘Abd al-Raziq.

The argument of ‘Abd al-Raziq’s 120-page essay was incendiary for its time: Islam has no formal role to play in political life, and to the extent it indirectly affects politics, it should remain within the confines of individual morality. Given today’s headlines cataloguing the doings and sayings of Islamic extremists, Islamist political parties, and Muslim religious authorities throughout the region, this line of argument may come as a surprise, particularly from an Islamic scholar educated at Al-Azhar and writing in 1925. But there it is.

The importance of ‘Abd al-Raziq’s work cannot be understated, for it set the tone of religio-political debate in the Sunni world for generations. Islamic scholars still grapple with it today. And considering the climate of discussion hovering over Islam and politics today, his work is more important than ever. Here, then, is my review of the new edition of ‘Abd al-Raziq’s essay, originally printed in the Digest of Middle East Studies in the fall of 2014.

Note: for purposes of continuity with the book, I used the editor’s spelling of the author’s name (“Ali Abdel Razek”) throughout the review.

Islam and the Foundations of Political Power

One of the most contentious debates within the Islamic world over the last century centers on the degree to which religion should shape and influence politics and governance. This debate helped spur and sustain many of the great political reform movements—progressive, conservative, and radical—of the 20th and 21st centuries. From the struggle to open Turkey’s political system to the Islamic Revolution in Iran, and from the rise of transnational jihadi networks to the constitutional debates of budding post-“Arab Spring” democracies, the question of Islam’s role in politics shaped and continues to shape public discourse on legitimate political power throughout the Islamic world.

Given the resonance of this issue throughout the Islamic world today it is refreshing, if unsurprising, that a newly translated edition of Ali Abdel Razek’s seminal work, Islam and the Foundations of Political Power, should appear. Part of Edinburgh University’s Modern Muslim Thinkers in Translation series and edited by Abdou Filali-Ansary, founding director of the Aga Khan University Institute for the Study of Muslim Civilization in London (2002-2009) and of the King Abdul-Aziz Foundation for Islamic Studies and Human Sciences in Casablanca (1984-2001), this new edition highlights the lasting impact and contribution Abdel Razek made to debate on Islam and politics, despite having been originally published in 1925.

Ali Abdel Razek’s essay was published in a mature political and intellectual milieu already steeped in the religion-state debate. He was born (1888) just as leading Islamic thinkers in Egypt like Muhammad ‘Abduh and Jamal al-Din al-Afghani began publishing their ideas on Islamic revivalism, modernization, and anti-colonialism. Journals like ‘Abduh’s al-‘Urwa al-Wuthqa (The Indissoluble Bond) and that of his disciple Muhammad Rashid Rida, Al-Manar (The Beacon), were widely circulated and generated considerable debate as political activism against British occupation intensified during the first decades of the 20th century. Following the 1919 uprising against the British and the subsequent political battles between the nationalist Wafd party and the British-backed monarchy, politics and the question of legitimate political authority took center stage in the Egyptian public sphere. It was against this backdrop—and that of Mustafa Kemal Atatürk’s abolition of the Ottoman Caliphate in 1924—that Abdel-Razek’s controversial work appeared.

As Filali-Ansary notes in his introduction, Islam and the Foundations of Political Power caused an uproar in Egypt among members of the Sunni religious establishment and intellectuals alike. Abdel Razek’s essay, only 118 pages in its current edition, challenged not only the foundational political assumptions of the conservative religious and monarchist classes, but also those of the ‘modernizing’ constitutionalists in the Wafd movement. On one hand, Abdel Razek refuted traditional/monarchist authority claims by disentangling, deconstructing, and systematically challenging the core tenets of the millennia-old scholarly political consensus developed after the time of the Prophet Muhammad. On the other, he upset the secular-nationalist Wafdists by legitimizing the use of scientific rationality and historical criticism in “religio-political matters,” tools they had sought to use as a means of public differentiation from the ‘backwards’ ulama and monarchy. (5)

The backlash against the essay was immediate and overwhelming. Abdel Razek was put on trial by the faculty disciplinary committee of al-Azhar, stripped of his title as an ‘alim, and banned from teaching. But what made his essay so inflammatory? The obvious answer is the essay’s subject and the manner in which it is addressed; however, perhaps more pointedly, Abdel Razek’s position as an ‘alim and faculty member at al-Azhar—the bastion of Sunni Islamic orthodoxy—made his essay all the more shocking and discomforting for the ulama.

Ali Abdel Razek begins his investigation with a simple premise: “None of the scholars who attested that the appointment of an imam [caliph] was a religious duty could substantiate this thesis with a verse from the Qur’an.” (36) From here, he proceeds to steadily unravel the traditionalist argument by poring over the chief sources materials of Islamic scholarship, the Qur’an and Sunna of the Prophet. Abdel Razek supports his arguments by elaborating on Muhammad’s prophetic mission and distinguishing it from its oft attributed political dimensions. After close examination of some 53 Qur’anic verses, he concludes, “Muhammad was strictly a Messenger, entrusted with a purely religious mission, uncompromised by any desire for kingship or temporal power…According to this view, Muhammad was no more and no less than an envoy sent by God, in no way different from his brethren-prophets who preceded him. He was not a king, nor the founder of an empire, nor someone preaching in favour of a kingdom.” (81)

Thus, Abdel Razek stipulates that justifications for the caliphate cannot be based on the “traditional” claim that Muhammad’s mission combined elements of political stewardship with religious prophecy. While he concedes that the Prophet’s status as the Messenger of God, the noblest of all humankind, and the leader of the Muslim community conferred “a certain degree of authority or power of his people,” this power must be differentiated from that of a typical temporal ruler. (82) Indeed, he argues that “The Qur’an explicitly forbids a view of the Prophet as a custodian of men, in charge of their affairs, possessing dominion over them, or for that matter a tyrant given to coercion.” (88-89) For Abdel Razek, the core Islamic principal of Muhammad’s uniqueness supports this differentiation. Moreover, the Prophet’s unique role can neither be bequeathed nor reproduced: “With the demise of the Prophet, the type of authority that he had hereto exercised came to an end. Therefore, as there was no one who could succeed him in that position, no one was entitled to inherit his prophetic function.” (107)

From a historical perspective Abdel Razek goes much further in his refutation of Islamic political authority, arguing not only that Islam provides no basis for sovereignty, but that the historical sovereignty imposed upon Muslims in the form of the caliphate has been overwhelming un-Islamic: “History does not offer us a single example of a caliph whose image is not associated with the fear inspired by the brutal force surrounding him, with the armed force surrounding him, and the unsheathed sword that lent him protection.” (47) And, additionally, “The caliphate has always been, and still remains, a disaster for Islam and for Muslims. It has been a constant source of evil and corruption.” (54) With arguments such as these, it is little wonder Abdel Razek won few friends among Egypt’s aristocracy and ulama.

At the end of his essay Abdel Razek concludes, “One looks in vain to either the Qur’an or the hadith for a simple allusion, whether explicit or implicit, which might give succor to the proponents of a political interpretation of the Islamic faith.” (92) Political organization and governance are therefore matters “religion has left to humankind, for people to organise in accordance with the principles of reason, the experience of nations and the rules of politics.” (117)

Abdel Razek’s brief but powerful and thoroughly reasoned essay shocked, offended, and inspired. Filaly-Ansari even goes so far as to suggest that scholarly backlash against the book from figures such as Muhammad Rashid Rida spurred the development of modern Islamism and Islamic political thought. Although perhaps a stretch, there is no doubt that Abdel Razek provoked the Sunni establishment into defending positions on Islam and political sovereignty it had long thought canonized. By invoking Ibn Khaldun’s admonishment for critical historiography and Muhammad Abduh’s call for a return to the fundament of the Qur’an in legal exegesis, Abdel Razek also reopened the debate among Muslim scholars on the role ‘reason’ could and should play in the interpretation and application of scripture and tradition. These issues remain hotly contested to this day.

In light of the reinvigorated global debates among Muslim scholars, intellectuals, and publics on the role of Islam in politics, Ali Abdel Razek’s essay is perhaps more relevant than ever. His provocative insight and methodically reasoned arguments provide readers—scholars and laypeople, Muslims and non-Muslims alike—an excellent springboard from which to begin their investigations of a deeply divisive but nevertheless intriguing subject. Filali-Ansary has rendered the public a great service in editing and publishing a new version of Islam and the Foundations of Political Power. As a foundational text in the scholarly study of Islamic political thought and a fascinating treatise on the relationships between religion and sovereignty more broadly, this new edition of Abdel-Razek’s timeless essay is a must-read.