No other leader in world history has been more scrutinised and ridiculed than Prophet Muhammad. Since the founding of Islam in 632 AD, Christians and Jews have described the Prophet of Allah as a blasphemer, bigot, terrorist, and pedophile, among other slurs. However, according to a new book The Covenants of the Prophet Muhammad with the Christians of the World (published by Angelico Press, 2013), these accusations are found to be dishonest, prejudiced, and not based on sound scholarship. 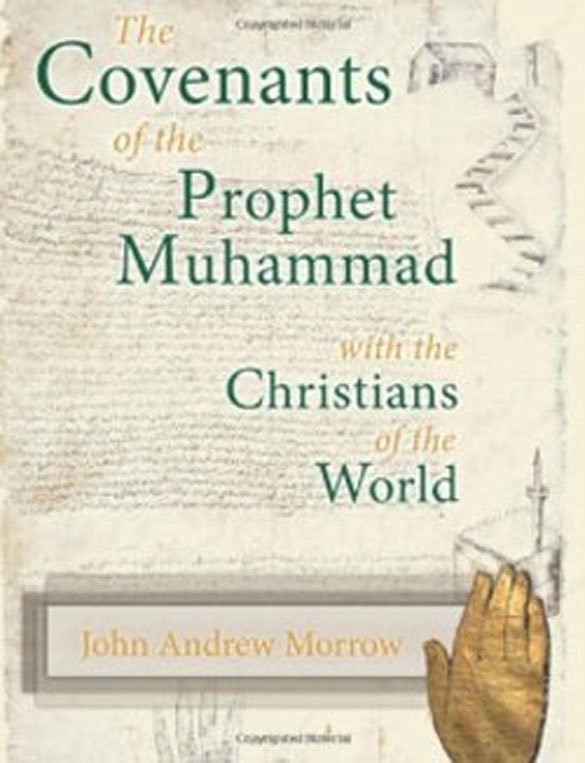 Dr. John Andrew Morrow, author of The Covenants of the Prophet Muhammad, is a scholar who received his PhD from the University of Toronto and completed the full cycle of Islamic seminary studies. He was raised in a multilingual family in Montreal and Toronto, Canada. Morrow is also a Native North American of the Metis nation and proudly identifies himself as an "Aboriginal Person."

In his book, Morrow applies a documentary analysis of textual and historical research to the covenants created by Muhammad. Notable American poet, Charles Upton, notes in the foreword that these documents -- letters, covenants, treaties -- which Morrow accesses "have largely been neglected by both traditional Muslim and modern western scholarship, and are practically unknown to the mass of believers." In reviewing Muslim, Christian, and secular documentary sources, Morrow's study of the covenants of the Prophet brings "out their light in this period of darkness in which the People of Scripture, Jews, Muslims, and Christians, have strayed from their sacred traditions of tolerance and co-existence."

The Covenants of the Prophet Muhammad provides a detailed account of Muhammad's character and conduct as seen through his lifelong encounters with Christian hermits, monks, priests, and communities. Morrow states that these experiences confirm that Muhammad had "confidence in his ability to count on the spiritual solidarity of the People of the Book," or members of the Abrahamic tradition. Morrow also affirmed that Muhammad "had much more in common with the followers of Christ than with the idol-worshippers who surrounded him."

One of the covenants analyzed by Morrow is the "Covenant of the Prophet Muhammad with the Monks of Mount Sinai." This agreement championed universal peace and harmony between Christians and Muslims. In the text, Muhammad calls on Muslims to respect Christian judges and churches, and for no Muslim to fight against their Christian brother. As Morrow rightly claims, the Covenant with the Monks of Mount Sinai is:

"a clear rejection of classism, elitism, and racism... all are equal before God for whom the most important thing is not language, skin color, social status or class position, which exclude others, but rather the degree of piety, humanity, love for others (which includes not only human beings but the entire natural order), sincerity of faith, the acceptance of His Commandments, and complete certainty as to the special place occupied by His Prophets, Messengers, and Imams."

Saint Catherine's Monastery is considered to be the only monastery in the world to serve both a church and a mosque. Morrow writes that for centuries, "the sound of ringing church bells came from the monastery's tower while the Muslim call to prayer was emitted from the minaret." Morrow describes the location of these two religious buildings an "aural manifestation of monotheistic unity [which] would have made the Messenger of Allah [Muhammad] proud."

In addition to the covenant with the Christians at Mount Sinai, Morrow examines "The Constitution of Medina," a key document of the Prophet's concerning the importance of human rights in Islam. According to Morrow, the "Constitution" created a community out of "a unique system which had never existed before and which has never been since despite honest efforts to emulate it." He adds that through the "Constitution of Medina":

"[i]dentity and loyalty were no longer to be based on family, tribe, kinship, or even religion: the overriding identity was membership in the ummah of Muhammad. The Constitution of Medina decreed that the citizens of the Islamic state were one and indivisible regardless of religion. Be they heathen, People of the Book, or Muslims, all those who were subject to the Constitution belonged to the same Ummah. In doing so, he created a tolerant, pluralistic government which protected religious freedom. The importance of this is so extraordinary that it is often misunderstood."

Moreover, Prophet Muhammad's "Medina Constitution" created a society which, Morrow claims, is one where

"every single member... enjoyed equality before the law as all privileges of class were abolished. The rich and the poor; the noble and the laymen; the Arabs and the non-Arabs; the blacks and the whites; the men and the women; and the children and the adults all had the same rights. Even Muhammad, as the Messenger of Allah, was not above the law."

In this context, the "Medina Constitution" was not only a revolutionary document for human rights, but it also expresses a democratic spirit. Morrow believes that Muhammad was an ultimate defender of diversity, as he mentions that the Prophet "established a form of social justice rare in any time."

The Covenants of the Prophet also offers an analysis of how Muhammad embraced Jews. Morrow argues that Muhammad's stay in the Cave of Moses at the top of Mount Sinai shows that he had a deep connection to Moses. Morrow writes: "Muhammad also insisted that the Law of Moses remained binding with some minor modifications which resulted from the final revelation." Furthermore, in the Treaty of Maqnah, which was made between Muhammad and Jews in Banu Janbah, a city in the Gulf of 'Aqabah, the Prophet stated that Jews "may be in peace... When this letter of mine comes to you, you are in security [under his rule]... Towards you is no wrong and no enmity. After today you will not be subjected to oppression or violence... Furthermore, the Messenger of Allah has exempted you from Jiziyah (a tax) and compulsory labor."

In touching upon the Prophet's covenants with Christians and Jews, Morrow makes it clear that Muhammad did not try to make the Islamic world only Muslim. He adds: "... the Prophet recognized that there were nations and peoples within the Muslim Ummah... Whether they were Jews or Christians, and later Hindus and Buddhists, these communities represented a kind of United Nations under Islamic rule." Morrow's point is significant as it alerts us to the idea that Christians and Jews were intended to be a part of - and protected by - the global Muslim community.

Perhaps the greatest strength of Morrow's brilliant piece of scholarship lies in its ability to reach the hearts and minds of Muslims, Christians, and Jews. He teaches us that Muslims must do a better job of protecting their non-Muslim minority populations, or else they risk apostasy in violating Muhammad's teachings on religious tolerance. The Covenants of the Prophet also instructs Christians to carefully consider Muhammad's covenants, which provide examples to counter popular stereotypes of the Prophet as a crazy and violent leader. Similarly, Jews are encouraged to consider the Prophet of Allah's legacy, as they can learn that he had reverence and respect for their ancient faith, Judaism.

The Covenants of the Prophet Muhammad with the Christians of the World recognizes that although there are differences between Islam, Christianity, and Judaism, Muslims are nonetheless advised by Muhammad to respect and embrace Christian and Jewish communities. The covenants of the Prophet of Allah, as Morrow notes, paint a clear picture of how Muslims are to treat their minority communities. Morrow's book reminds us of the possibility that Muslims, Christians, and Jews can live side-by-side in peace and harmony if only they heed the advice of Prophet Muhammad.