‘Friends and enemies’: Jinnah vs. Gandhi

Exclusive excerpts from a book that throws fresh light on arguably the two most influential leaders of the subcontinent — Jinnah vs. Gandhi, to be released this week 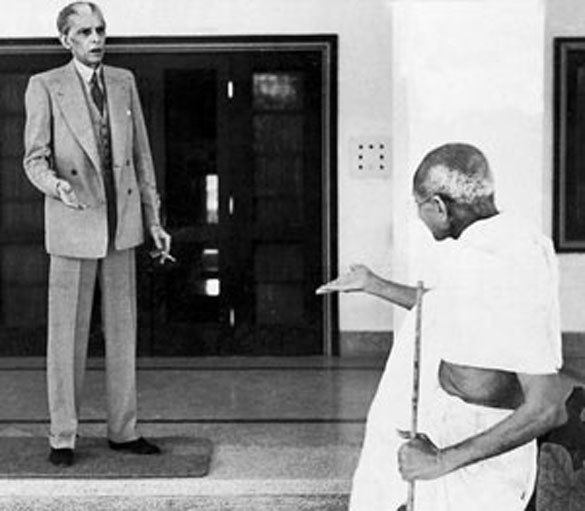 The extended confrontation between Mohammed Ali Jinnah (1876–1948) and Mohandas Karamchand Gandhi (1869–1948) was one of the great dramas of the twentieth century. For nearly three decades these two remarkable men were locked in a series of political battles that involved opposing views of individuals, communities, states and nations — even the cosmos. The two had contrasting styles of leadership, lifestyle and presentation that reflected very different attitudes towards political power, and to what it can and cannot do. The stakes were high, and the eventual outcome not only created South Asia’s two principal nation states, but also shaped their political and social character, and has had a direct influence on wider geopolitical concerns, including superpower relations, nuclear proliferation and the development of international terrorism.

As leaders and thinkers, Jinnah and Gandhi deserve full appreciation of their talents, clear assessments of their objectives and measured criticism of their weaknesses. Sadly, these basic courtesies have been denied them rather too often. Gandhi has been relentlessly over-praised and Jinnah has attracted few apologists outside circles as willing to rewrite history as to understand its complexities...

…Jinnah and Gandhi were public figures involved in national politics for more than 40 years. This brought them into close contact with literally thousands of people... Much of what we know about the two comes from the testimonies of these witnesses. The picture that emerges is, of course, unclear, because although politics may be about trying to win friends, the result is often the making of enemies. Gandhi, it must be said, left a much better impression on most of his contemporaries than Jinnah, and this has heavily tilted the verdict of history in as far as it is influenced by personal memoirs. The chance to belittle and contemn Jinnah has scarcely ever been spurned by anyone well placed to do so, and this sort of criticism has stimulated a counterbalancing effort from Jinnah’s supporters. The result has been a body of literature about him that is saccharine in the extreme.

The most sincere voices that speak up for him come largely from those impressed by his easy brilliance, and relate to his early years. Two British Secretaries of State for India were open admirers: Lord Crewe, who called him the ‘best talker’ in the delegation that came to see him in London in 1914, and Montagu, who in 1917 watched him debate with Viceroy Chelmsford and tie him up in ‘verbal knots’ with his dialectical skill.

Of hostile witnesses, pride of place must go to Lord Mountbatten. The range of critical remarks he made about Jinnah is quite striking. Officially, at the time, Mountbatten settled for ‘cold’, though afterwards he was rather less kind, calling him mad, megalomaniac, a clot, a bastard and, most famously, ‘a psychotic case’. He found Jinnah ‘most frigid, haughty and disdainful’, and cast him as ‘the evil genius of the whole thing’. This typifies the tone of much of what Jinnah’s opponents habitually thought about him, but ‘friends’ sometimes concurred. M.C. Chagla described him as ‘cold and unemotional’. Chagla states that Jinnah cultivated no relationships outside politics, and had ‘no personal or human side to his character’...

Friendlessness or isolation is a recurring theme in Jinnah’s life. He was a solitary figure at several points in his career, but this characteristic seems to have attached to him regardless of his situation. Diwan Chaman Lal, a Punjabi Congressman who shared a passage to Europe with Jinnah in 1928, wrote of him as a man whose integrity was ‘beyond question’, but also remarked that Jinnah had been ‘the loneliest of men’. Stafford Cripps met him in December 1939 and characterized him as ‘an intensely lonely man’ without confidants or advisors... Whether he was consciously projecting an image or not, this kind of observation feeds easily into readings of Jinnah’s character, both positive — that he was a man apart, carrying a crushing burden — and negative — that he was aloof and haughty.

Politics for most politicians is a serious business, and for Jinnah more than most. He never mastered the deftness of touch that Gandhi could employ. But there was once a lighter spirit discernible in him, captured for us by Sarojini Naidu. She was a close colleague of Jinnah’s in the 1910s, when he was prominent in both the Congress and the Muslim League. Her extended description of him contains most of the well-known phrases applied to his early career and it deserves to be quoted at length on the subject of his character, if only to counterbalance much of what is found elsewhere. In 1918 she contributed an introduction to a collection of his speeches, in which she describes him as: ‘Somewhat formal and fastidious, and a little aloof and imperious of manner, the calm hauteur of his accustomed reserve but masks, for those who know him, a naïve and eager humanity, an intuition quick and tender as a woman’s, a humour gay and winning as child’s…a shy and splendid idealism which is of the very essence of the man.’ Once upon a time he could be as likable as he was impressive...

Gandhi had his share of frustrations and sorrows too, including three extended spells in prison, something that Jinnah’s style of political activism always spared him. But the Mahatma’s mild nature never failed, and there is very little contemporary criticism of his character to be found, especially not from his inner circle. This reflects the extraordinary reverence in which his contemporaries held him and the way that he seems not to have abused the space and authority this granted him. He was essentially the same in public and private. He never stood on ceremony, or hectored his opponents, no matter how far apart he stood from them on the issues at hand, whether he was addressing the king or a minor Raj official. His ability to reach out informally across political and social divides was extraordinary; during his trip to England in 1931, he managed to befriend the very mill workers that his hand-spinning was intended to condemn to unemployment.

Gandhi also enjoyed a much wider and warmer kind of political support than that which Jinnah constructed so painstakingly. His political aims were easily understood and generally shared. Just as importantly, his methods were thought to be correct; Indian freedom under Gandhi was to be won in an Indian way. To oppose him coming from within either orthodox Hinduism or broad Congress philosophy would have seemed either irreverent or un-Indian. Those who did oppose him found it difficult to remain in the Congress: Jinnah in 1920, C.R. Das in 1923, and Bose in 1939 had to leave and create their own platforms to oppose him at an all-India level. Criticizing the Mahatma was potentially a short cut to the political wilderness.

Contemporary critics of Gandhi were not usually close to him, mainly because he tended not to leave cast-offs... One exception was Jawaharlal Nehru, who frequently expressed his exasperation at the Mahatma’s twists and turns. But through it all Nehru always admired him, and thought of him as a magician, capable of pulling off feats of political sorcery of which no one else was capable. In particular, Nehru recognized Gandhi’s capacity to connect with the wider population in a direct and very Indian way. His unique ability to do this, and the unifying and empowering effect of that ability, was the main factor that pulled the Congress out of its middle-class youth, then anchored it as a powerful force at the centre of Indian politics.

Several senior members of the Congress did later write memoirs containing criticisms of Gandhi ranging from mild to severe. Kanji Dwarkadas, in Freedom for India (1966), is critical of Gandhi’s inconstancy, his ‘continuously changing moods and policies’. This we might expect from a close friend and confidant of Jinnah’s, but Dwarkadas himself has a different explanation. He lays claim to a degree of uncommon detachment about Gandhi because he never came under the power of his ‘hypnotic influence’. S.C. Bose was less restrained in The Indian Struggle. He criticized Gandhi for being, by unpredictable turns, ‘obstinate as a fanatic’ then ‘liable to surrender like a child’, possessing neither the ‘instinct’ nor the ‘judgement so necessary for political bargaining’. Bose became increasingly frustrated with Gandhi through the 1930s. He was a persistent doubter, and an inveterate opponent of Gandhi’s chosen heir, Nehru. Bose’s eventual resignation from the Congress in 1939 ended the dispute, and Bose’s subsequent career as an authoritarian, militaristic, national-socialist amply displays his basic differences with Gandhi as philosopher and leader.

Among friend-critics, the most prominent was Rabindranath Tagore, who had a clutch of disagreements with Gandhi, most notably over the Non-Cooperation Movement of 1920. The disorder repelled Tagore; he called it ‘the anarchy of mere emptiness’. He found it impossible to support the burning of valuable clothes and the denial of schooling to young Indians that the boycott required. Having publicly dubbed him ‘Mahatma ji’ in 1919, he was soon privately accusing Gandhi of ‘a dangerous form of egotism’. The two men remained on cordial terms, but were never close after the Non-Cooperation Movement...

Misunderstanding of Gandhi led to comparisons between him and Hitler, a wild rhetorical leap that in hindsight seems sensationally misplaced. The travel writer Rosita Forbes (1893–1967), who met both Gandhi and Hitler, was prepared to make comparisons between them at a time when Hitler was still seen as the architect of German national revival, not a warmonger and mass-murderer. In India of the Princes (1938) Forbes makes a double comparison between the Fuehrer and the Mahatma. She considered that Gandhi had a ‘mental isolation’ similar to Hitler’s and seemed to be without ‘comparative knowledge’. The kind of politics that Gandhi was promoting was never to the taste of establishment insiders, and a few pages later Forbes opines that both leaders ‘feel too much’.

There were also more serious political observers who made direct parallels between Gandhi and European fascists, and at the height of the Second World War it did at times seem that Gandhi was, if not in league with the Axis powers, then at least aiding their cause by undermining British military efforts in the Far East. It was the intimate connection between Gandhi and the masses that prompted these comparisons, and this is what sometimes made the Congress look like a fascist organization to the British. They added up the movement’s mass popularity and multiplied it by the Congress’s opposition to British rule and came out with a neat calculation that defined Gandhi as a nationalist demagogue and an enemy — in sum, a fascist.

(Excerpted with permission from Hachette India)