While Europe Was Still Groping Its Way through the Dark Ages, Timbuktu Was a Beacon of Intellectual Enlightenment

THE BAD-ASS LIBRARIANS OF TIMBUKTU

And Their Race to Save the World’s Most Precious Manuscripts 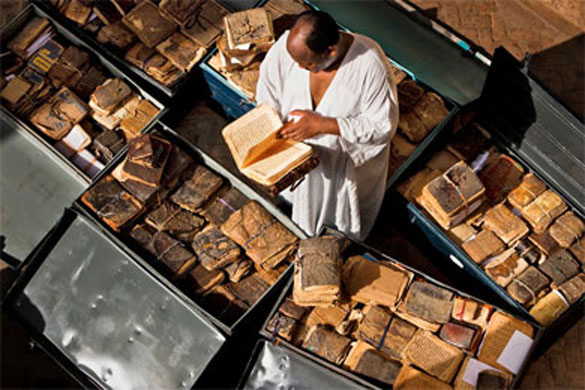 In the summer of 1826, a Scotsman named Alexander Gordon Laing became the first European to set foot in Timbuktu, a city that would become synonymous with mysterious remoteness. The inhabitants of Timbuktu would have been amused by the British imperialist assumption that their city had been “discovered.” By the time Laing reached the place, it had been a thriving international centre for centuries, the economic and intellectual heart of the sub-Saharan world, where travellers, traders and thinkers, ­Africans, Berbers, Arabs, Tuaregs and others gathered to trade gold, salt, slaves, spices, ivory — and knowledge.

While Europe was still groping its way through the dark ages, Timbuktu was a beacon of intellectual enlightenment, and probably the most bibliophilic city on earth. Scientists, engineers, poets and philosophers flocked there to exchange and debate ideas and commit these to paper in hundreds of thousands of manuscripts written in Arabic and various African languages. The British historian Hugh Trevor-Roper once remarked: “There is only the history of Europeans in Africa. The rest is darkness.” Timbuktu’s staggering manuscript hoard is the most vivid proof of how wrong he was.

That ancient literary heritage, and the threat it faces from radical Islam, is the subject of Joshua Hammer’s book “The Bad-Ass Librarians of Timbuktu,” part history, part scholarly adventure story and part journalistic survey of the volatile religious politics of the Maghreb region. The title is quite irritating; the rest of it is very good.

Hammer delights in the explosion of medieval scholarship that took place in Timbuktu. By the 16th century, a quarter of the 100,000-strong population were students, drawn from as far away as the Arabian Peninsula. As one proverb puts it: “Salt comes from the north, gold from the south, and silver from the country of the white men, but the word of God and the treasures of wisdom are only to be found in Timbuctoo.” As well as religious texts, those treasures included works of poetry, algebra, physics, medicine, jurisprudence, magic, mathematics, history, botany, geography and astronomy. Ethicists debated polygamy, usury, conflict resolution and the ­morality of smoking. The thinkers of Timbuktu even compiled sex advice, as imaginative and unreliable in the 16th century as it is today: “The dried, pulverized penis of a lizard placed tenderly into honey then licked will let a man experience full sexual desire and satisfaction.”

The city’s scribes wrote in a variety of calligraphic styles, inks and colours: the African tradition of Hausa with thick brush strokes, the angled Kufic script from Persia and the curved and looping Maghrebi style. The city was a readers’ paradise, its inhabitants “searching with a real passion for volumes they did not possess, and making copies when they were too poor to buy what they wanted.” Eclectic scholarship thrived under the mystical, tolerant form of Sufism that dominated what is now Mali. The city, as Hammer puts it, was an “incubator for the richness of Islam.” But the tradition of open-­minded academic inquiry was also subject to periodic attack from bigots and looters, from bouts of anti-Semitism aimed at the city’s substantial Jewish population, and the ­anti-intellectual rigidity of successive waves of Jihadis.

The history of Timbuktu, Hammer writes, is marked by “the confrontation between these two Islamic ideologies — one open and tolerant, the other inflexible and violent.” Radical Islamists saw the manuscripts as heretical, and French colonial forces in the 19th century viewed them as plunder, and so another tradition emerged: that of concealment. The custodians of these priceless documents took to hiding them — inside their homes, in holes or in desert caves. Timbuktu’s intellectual inheritance was not only among the richest in the world, but also one of the most secret.

The hero of Hammer’s story is Abdel Kader Haidara, inheritor and protector of a uniquely fine manuscript collection, a gentle, scholarly man who began gathering manuscripts in the 1980s on behalf of the Ahmed Baba Institute of Higher Learning and Islamic Research in Timbuktu. Over the course of two decades, Haidara and other dedicated antiquarians scoured the region, buying up ancient texts from remote villages. Hammer estimates that the intellectual patrimony of Timbuktu now amounts to a staggering 377,000 manuscripts.

Then came the 21st-century Jihadis, Al Qaeda in the Islamic Maghreb (AQIM), the latest eruption of Islamic intolerance in the region. In March 2012, briefly combining forces with Tuareg rebels fighting for an independent homeland and armed with weapons from the collapsed Libyan regime of Muammar el-Qaddafi, they descended on Timbuktu.

Having driven out the government forces, the Islamists set about the now all-too-familiar process of religious cleansing, enforcement and destruction. The wide-ranging music selection on Timbuktu radio was replaced by uninterrupted Quranic verse, women were forced behind veils, men made to grow beards. Squads of enforcers ensured strict Sharia observance at the point of AK-47s; citizens who wore their pants too short, or allowed their cellphones to ring with Western tunes, or otherwise violated the minutiae of strict Islamism were liable to thrashing or worse. While the Islamists set about imposing their rules, Haidara and the other librarians undertook one of the greatest cultural evacuations in history: The manuscript collections were secretly packed into metal trunks, loaded onto mule carts, and hidden in private houses and then in the Malian capital, Bamako.

Hammer writes with verve and expertise, but there are two problems with the thriller tone that underpins his story. The first is the question of just how “bad-ass” Haidara really was. While his teams were removing manuscripts, he had evacuated himself to Bamako, offering coordination and encouragement from a distance. This is a perfectly acceptable decision for a middle-aged scholar with two wives and lots of children, but it doesn’t quite make him Indiana Jones.

The level of threat posed to the manuscripts is also debatable. Like most terrorists, the forces of AQIM were on the whole very stupid. The Islamists’ control of Timbuktu focused on wrecking the ancient Sufi shrines, mounting public amputations and boasting on Twitter; the finer points of the city’s cultural heritage didn’t seem to interest them, and as Hammer acknowledges, the manuscript collections were “mostly ignored” until the final stages of the occupation. In January 2013, 15 Jihadis made a bonfire of 4,000 manuscripts at the Ahmed Baba Institute. But by that time many of the jewels of the collection were already in safekeeping, and the French military was preparing to oust AQIM in what would be an object lesson in the use of force against radical Islamist forces.

The great Timbuktu manuscript exodus may have been more prophylactic than urgently necessary, but it was a remarkable achievement, nonetheless, bringing together international funders, a network of smugglers and a handful of dedicated local curators. The exfiltration required careful cataloguing of the collections, and this may be the most lasting legacy of the episode: The Islamists accidentally drew worldwide attention to Timbuktu’s literary heritage, and enabled the first full accounting of its ­magnificence.