Life in The Mughal Era: Ardhakathnak’s Greatest Achievement Is Its Astonishing Ability to Collapse the Centuries

Imagine a historian centuries far into the future looking back at our present times. If they can access the digital detritus of our limitless traces of social media, the one thing they will have no dearth of is a glimpse into our personal lives: what we ate, what we read, what opinions we had on simple everyday matters or complex political issues. Even if it turns out that futurists are right about the unreliability of digital archives, tree books depicting the varied aspects of our quotidian lives will not be in short supply. 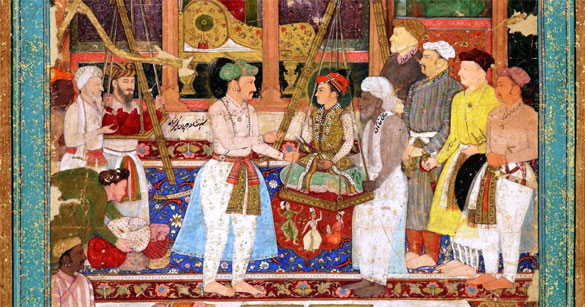 Now think of the contrast for a historian of the medieval or early modern eras, like myself. For us, such details about people’s everyday existence, feelings, and experiences, are almost impossible to come by. 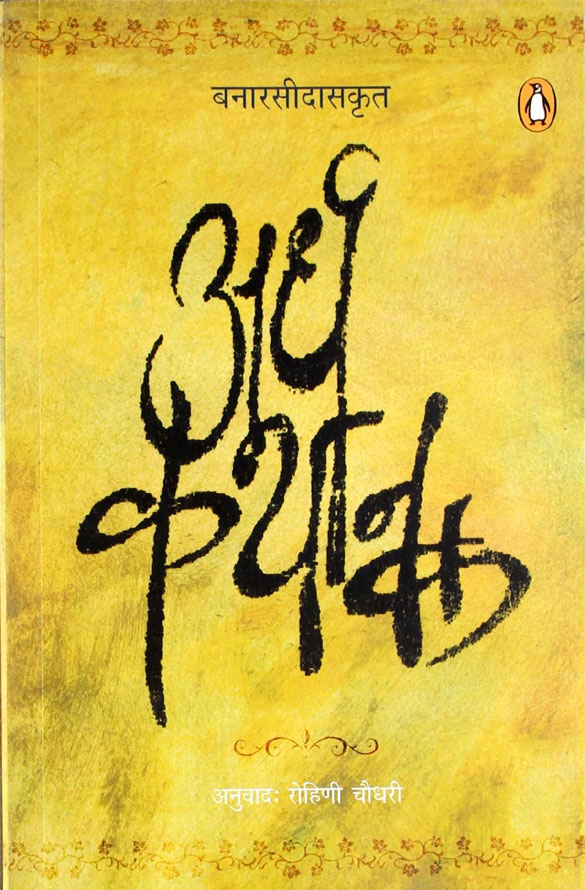 Banarasidas (b. 1586), a seventeenth-century Jain merchant, is therefore a rare and valuable voice. Sometime in the year 1610, five years into the Mughal emperor Jahangir’s reign (r. 1605-1627), Banarasidas, set out on a journey from Jaunpur in present-day central India to Agra. At the time, Agra was a thriving commercial and political centre at the heart of the Mughal empire. As John E Cort, Professor Emeritus at Denison College, has written, “thousands of Jains migrated to the city in response to the opportunities available there. Many of them occupied positions at all levels of the Mughal administration. Others used the city as the base for trading networks.”

Banarasi, it seems, was also interested in trying his luck in Agra. His father, Kharagsen – himself a successful gems and jewels merchant who had also served the Mughal administration – had been disappointed at his 24-year-old son’s wayward ways in the past. Yet, on this occasion, and with some careful consideration, Kharagsen fitted the young man with an assortment of goods to sell in Agra: “loose jewels and ornaments”, including “two bracelets, two rings” and some rubies, sapphires, and “bags filled with the dust of precious stones”, and sundry items including ghee, oil, and fine Jaunpur cloth.

It is Banarasi himself who tells us of these matters in an account of his life written in verse – a text entitled Ardhakathanak, meaning “a half story”. Completed sometime in the winter of 1641, Banarasi called his work ardha kathanak because, at the time, he was 55 years old, and believed, following the Jain tradition, that a person’s life span was 110 years. His 675-verse composition is primarily in the third person and is written in what he calls the “common speech of Madhyadesh”: a mixture of the literary vernacular, Brajbhasha and Khari Boli, akin to the standard Hindi recognised today.

As a literate male well versed in the art of poetry writing – he is also the author and translator of several well-respected works on Jainism – Banarasi was certainly not without privilege. But neither was he among the wealthiest people at the time, nor a member of the aristocracy. He may well have dropped off the historical record, if the Ardhakathanak, and the handful of other works he composed, had not survived. What we do know of him indicates that he and his family occupied a place in the middle of the social hierarchy in early modern (1450 to 1750 CE) Northern India. 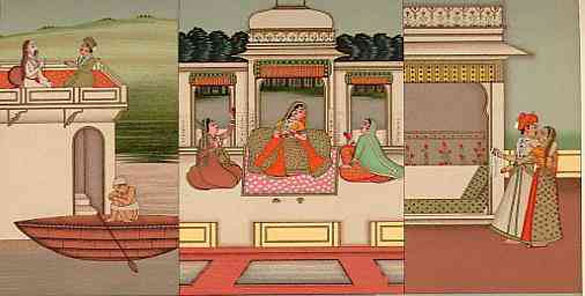 By the time Banarasi wrote his life narrative, two Mughal emperors, Babur and Jahangir, had both produced personal memoirs, in Turki and Persian respectively. It is unlikely that Banarasi had read either of those works. He mentions his knowledge of Sanskrit and Prakrit and his narrative also reveals some of the literature he and his friends were reading at the time. But even though this was an eclectic mix of Jain philosophical and Sufi tracts – discussed in gatherings akin to modern-day book clubs – none seem to have been what we could call biographies or autobiographies. This is what makes the Ardhakathanak even more remarkable: the fact that it lacks, as one of its translators, Mukund Lath notes, “a concrete model or any tangible influence”. Banarasi’s story is indeed one of its kind for its times – delightfully authentic, checkered, and self-revelatory.

Banarasi’s father who had set great store, as fathers do, by his son’s success, was destined to be disappointed. Banarasi did manage to get to Agra despite bad weather and other safety hazards but found the city’s fast-moving ways too difficult to cope with. He claims to have faced disasters one after the other as soon as he got there, some on account of his own inexperience and lack of interest in the trade. The Jaunpur cloth he had brought along with him sold at a loss and he unwisely entrusted the precious jewellery and gems to strangers who made away with them. Banarasi says:

“The ways of doing business in the city of Agra,

The ignorant and rustic Banarasi did not understand.

The saga did not end there. In a tale that to us today may have the ring of “the dog ate my homework” excuse, Banarasi lost his pearls and other gems that he had hidden in the sheath of his pyjama strings because the string unexpectedly broke; on another occasion, “mice cut through the pyjama strings (presumably a different set) and ran away with his rubies”. As if this were not enough, a tax collector confiscated the money he had received for the sale of some bracelets. This series of misfortunes culminated with what must only have felt like the proverbial rubbing of salt on his wounds, as a jewel-studded ring that he had ‘tied with a knot’ was lost too: “The ring had fallen somewhere; he never found it again.”

Through such tales, elaborate and detailed, the Ardhakathanak offer flashes of daily life that no dry, discursive historical narrative can capture. For instance, we know a great deal about the Mughal courts, royal patronage, and administration from the courtly documents, but what the Ardhakathanak tells us about are the ways in which small and moderately successful merchants conducted their trade and interacted with the Mughal state. 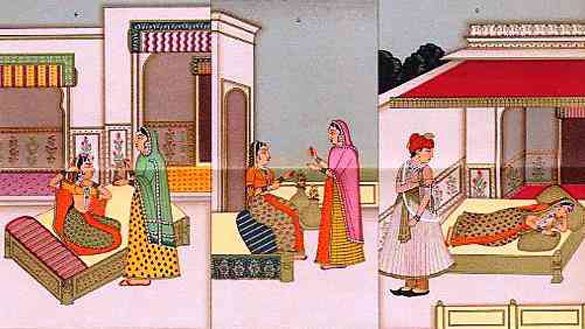 The Shrimal clan to which Banarasi’s family belonged were well-established traders in many Mughal cities at the time. Kinship ties and family relations were consequently very crucial for conducting business and forging commercial partnerships. Banarasi mentions that he turned to such networks on multiple occasions, including after he first reached Agra. As he was wondering where he might go in the city, he recalled his brother-in-law, his younger sister’s husband, Bandidas, also lived there; it was to him that Banarasi turned to start his new life. Says Banarasi, “He [Banarasi] had heard said – one can always rely on relatives and saints.”

Banarasidas lived through a number of local-level administrative changes, most extraordinary of them all is that he experienced the reigns of three Mughal emperors: Akbar, Jahangir, and Shah Jahan. Banarasi’s descriptions of the chaos that the city was thrown into when the news of Akbar and decades later, Jahangir’s death, reached them are vivid. He was in Jaunpur, and in his early twenties, when Akbar died in Agra in 1605, for instance. Not only did Banarasi fall off the stairs of his home and hurt himself badly due to the shocking news, but he also notes: “riots broke out everywhere” and people feared for their safety. It was only when the deceased emperor’s eldest son, “Sahib Shah Salim” or Jahangir was declared the king that matters calmed down.

This is not all. The Ardhakathanak is replete with personal details, and is, in fact, a clever work of creative writing. Throughout the journey of his half-life that Banarasidas walks his readers through, he himself appears fascinating and witty, and also introduces us to a wonderful cast of relatable characters that make up his world: his father with whom he clearly had a complicated relationship; his mother, grandmother, and three wives (sequentially), who remain unnamed but seem to have played crucial roles in his emotional life; and a number of close friends and associates with whom he spent much of his professional and leisure time.

In a touching verse dedicated to Narottamdas, a fellow trader and someone he refers to as his “bosom friend”, Banarasi skillfully honours his mate with an acrostic: each of the sentences in the verse begin with the letters that make up Narottam’s name. 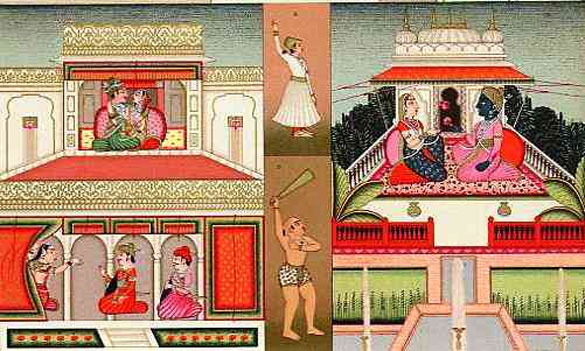 Banarasi’s account matters for many reasons, but two stand out. First, the Ardhakathanak contests a currently divisive perception that it was their religious and community identities that primarily motivated people in Mughal India. Even though religious beliefs and a broader pursuit of Jain philosophy shape Banarasi’s telling of his own life, the Ardhakathank reveals that Banarasi and the others around him did not always view their social interactions through these collective lenses.

Indeed, the traders in Banarasi’s world were constantly affected by the quirks of Mughal functionaries on the ground but at no point did the question of the officials’ religious affiliation come into play. Instead, what comes through is a more universal tension between the potential influence of wealthy merchants and the administration at the local level, rather than any imperial interference.

This is depicted in one instance when a certain Nawab Qilich, Jaunpur’s governor, rounded up all the jewellers in the city and tried to take their money by force. On the other hand, Banarasi’s own father briefly served in the revenue administration under a diwan who was a fellow Shrimal named Rai Dhana. Rai Dhana in turn served under the Pathan governor of Bengal. Society as reflected in Banarasi’s account, and as David Arnold and Stuart Blackburn have written on South Asian life narratives more generally, is complex and one where “collectivity and individuality are coming together and are constantly in dialogue”.

The second telling revelation is less surprising once we think about it, but it is perhaps the Ardhakathnak’s greatest achievement as far as even the most casual of modern readers is concerned. Scholar of Hindi and Professor Emeritus at University of Texas Austin, Rupert Snell, captures this eloquently when he says: “The most remarkable aspect of this text is its astonishing ability to collapse the centuries, and to make the 17th century understandable to the reader today. If the Ardhakathanak is a unique witness to a particular time in the history of India and the world, it is equally a remarkable statement about the timelessness of human experience…Despite its remoteness in time (for all modern readers) and also in place (for those of us living outside Northern India), Banarasi’s tale makes frequent and profound contact with our own experience.”

At the end of his poem, Banarasidas writes his farewell: “To those who recite it, hear it, read it, To them, his [Banarasi’s] good wishes,” Banarasi would pass away soon after completing the Ardhakathanak: his half a tale, would in fact be the story of his entire life. I suspect, it is this shared sense of the ephemeral nature of the human existence – Banarasidas, by his own admission falls in love twice, suffers severe illnesses, and talks about losing all of his nine children – that will stay with us in our own Covid-ridden times.

As he brings his narrative to a close, Banarasi, true to his mercantile profession, lists his own virtues and faults, like a balance sheet. The ledger of good and bad is, as we have by now come to expect from Banarasi, variegated. And among the “faults” there is one we should all emulate: “Sometimes finding himself alone, he [Banarasi] breaks into a dance.”

Note: I have used Rohini’s Chowdhury’s translation of Banarasidas’s Ardhakathanak for all citation of the work (Penguin Books, 2009).

Aparna Kapadia is a historian of South Asia at Williams College in the US. She is the author of In Praise of Kings: Rajputs, Sultans and Poets in Fifteenth-Century Gujarat.

Original Headline: What a Jain merchant’s rare and candid autobiography tells us about life in the Mughal era